About Graham Archives Get new posts by email My blog is re-launched!
Previous month:
April 2007
Next month:
June 2007 Well, the final sell-off of plants from the Chelsea exhibits is over and no sooner had the last visitor left the show than the exhibitors began the curious task of dismantling everything and heading for home. I only worked on one Show Garden at Chelsea, many many years ago: a naturalistic display of wild flowers staged by Kew – the first ever wild flower garden at Chelsea, I think. And tearing apart something so beautiful creates a very curious and depressing feeling – even when you know that it was never quite real.

But I leave with you with a couple of intriguing sights from the show. First of all, veteran gardening columnist and TV gardener Peter Seabrook, who recently celebrated thirty years writing for Britain’s top selling Sun newspaper (has anyone else worked for Rupert Murdoch for so long?) launched a new plant that he found in his own garden in Essex.

And finally: Marijuana, Cannabis sativa, has been on display at Chelsea for the first time ever. A number if these elegant plants were ranged across the back of an exhibit by the South East England  Development Agency which highlighted the value of plants for uses other than food and garden display. In fact, cannabis was widely grown in the 19th century as an ornamental foliage plant, and I remember the first time I visited Christopher Lloyd’s garden at Great Dixter: amongst a collection of summer annuals growing in pots outside the front door was a magnificent cannabis plant. However, when the local police heard about it they paid him a friendly visit and visitors could enjoy (the sight of) it no more.

Cannabis is used to make rope and fabric – and when I was a kid I remember using the boiled seeds as fishing bait. The plants were not sold off to the public on Saturday – although one or two disappointed exhibitors could perhaps have made use of them…

That's it for my Chelsea blog series for this year. I'll be adding one or two pictures over the next few days but otherwise, it's back to what you might call "normal".

For the first time this year, the Chelsea Flower Show has been run entirely by women. Alex Baulkwill took over as Show Manager last year, having worked on the RHS magazine The Garden for some years. She’s in charge of all the exhibitors, and her deputy’s also a woman. The Operations Manager at the show, in charge of the site, the services, logistics etc is Caroline Humphries and her deputy is also a woman. The Press Office is staffed entirely by women. Even the recently appointed Director General of the whole Society is a woman, Inga Grimsey, and three of the other directors are also women. Bob Sweet, Head of Shows Development at the RHS, and Stephen Bennett, Director of Shows at the Society had better look out as the image of the Society run by men in suits is changing at last!

I haven’t seen the many many hours of Chelsea coverage on BBC TV this year, I’ve either been at the show or subduing my cold with potions that sent me to sleep. But I’m told that the Silver-Gilt Medal winning Westland Garden, designed by Diarmuid Gavin the Dublin-based designer and TV gardener, and named for his sponsor, has not been featured at all. Can anyone confirm or refute that?

At one time Diarmid was part of BBC TV’s presentation team but now seems to be out of favour, fampous as part of an awkward double-act with regular host Alan Titchmarsh in which they failed to pretend to like each other.

He’s even been involved in a dispute with fellow Chelsea designer Andy Sturgeon over the supposed plagiarism of one of his designs and and the dispute even ended up in court! He’s also fallen out with Bunny Guinness, one of the BBC radio gardening team. You can read all about it here.

Bill Shankly, the great football (soccer) manager at Liverpool Football Club once said: “Some people believe football is a matter of life and death… I can assure you it is much, much more important than that.” It looks as if Chelsea garden designers are developing the same attitude about their gardens – or perhaps about themselves!

In Britain we have an expression: "Handbags at three paces." It derives from the idea of two women attempting to whack each other in the face by swinging their handbags on outstretched arms. Commentators sometimes use the phrase to deride football (soccer) players shouting at each other and pushing and shoving on the pitch. Sounds like a great term for feuding garden designers.

American readers, by the way, will be astonished at the amount of TV coverage of the Chelsea Flower Show - much of it on BBC1, the top-rated channel in the country. It's as if ABC cancelled Grey's Anatomy and ran flower show coverage instead - and ran the flower show every night of the week. Mind you, Britain is the country where the top rated reality TV show is SpringWatch, which features live coverage of nesting birds and squabbling foxes out in the countryside. Those Brits...

Sorry about the lack posts here... I've been struck down by one of those knives-in-the-throat, hacking cough, blocked sinuses and aching muscles - just what I need to go with the feet that feel as if they've been pounded with a steak hammer. Fortunately, I've not got the famous "Chelsea flu". This is caused by an allergic reaction to the tiny unfertilized flowers which waft around from the many London plane trees near the show gardens and press tent.

And each of my three US radio interviews was plagued by technical problems and had to be cut short. Again, my apologies.

Anyway, to keep you going, here are few links to places where you can find out more about the show.

Unfortunately, the RHS Chelsea blogs have been something of a disappointment, mainly owing to a chronic lack of posts, so I'll refrain from embarrassing them further by giving you the link!

Now, where's my cough medicine - or jollop as my father used to call it.

Well, whatever next! You may have noticed that there's been a problem with the Chelsea Flower Show webcams - this is why: The router that connects the webcams was stolen! The cables were discovered flying free after someone - we have our suspicions... - levered it from its housing, disconnected the cables and made off with it! And you thought the Chelsea Flower Show was such a respectable institution.

Fortunately, the RHS web team have installed a new router and everything is up and running again. These webcams give you a great view of the show. So now that they're working well again please check the Show Garden webcam and Great Pavilion webcam.

After judging today, Her Majesty the Queen arrived for the Royal Visit. Guided by the Royal Horticultural Society’s President, she toured a number of Show Gardens and exhibits in the Great Pavilion in a distinctive rose pink coat with crimson buttons. She always seems to wear colours which stand out from the dark suits around her: primrose yellow one year, pale lime green another. The police with their sniffer dogs were seen around the show earlier and most people were cleared from the showground.

She really seemed to be enjoying herself. In the picture she’s seen chatting to two members of the Hardy Plant Society, whose exhibit celebrates the fiftieth anniversary of the founding of the society.

Well, it was a fascinating afternoon judging some of the exhibits of perennials in the Great Pavilion. Most, including a lovely stand of ornamental grasses from Knoll Gardens, were of a very high standard and their exhibit also featured three new grasses that none of the judges had seen before. these included the very pretty, and drought toleraant, Panicum virgatum ‘Dewey Blue’ from the USA. This plant was selected by Rick Darke on the coast of Delaware. Rick was on hand at the show to launch his superb new book on grasses, The Encyclopedia of Grasses for Liveable Landscapes.

One exhibitor, who perhaps I won’t name, had obviously been having trouble with his agapanthus (African lilies). He must have been so disappointed that so few were in flower. But it was great to see new plants like the pink and white bicoloured sweet pea, ‘Promise’, with its wonderful scent, on the stand from Matthewman's Sweet Peas.

The results will be out early in the morning, I’ll bring you the highlights, including news of how the American garden, an the other show gardens, fared in the medals, as soon as possible.

I have to say, however, that as I write this on Monday morning one of them has disappeared! When I see the man in charge of them... Ah, there he is. Geoff!!! (Just a moment...) OK... he's sorting it out. I'm sure by the time you read this it will be fixed.

Later on Sunday afternoon, this Chelsea Pensioner (war service veteran) in his traditional uniform enjoys a glass of Fetzer Chardonnay on the Fetzer Sustainable Winery Garden. The California native annuals on this garden, grown in Britain!, are simply superb and arranged so exquisitely. And the design of the barn, using recycled timber, is both rustic and cleanly elegant.

The overall quality of the gardens this year is unusually high. This is because designers have resisted the temptation – to which they have sometimes succumbed in the past – to create elaborate buildings and other structures and give less attention to the plants. There are some impressive buildings both traditional and modern, but everywhere the plants and the planting is of a very high standard.

These two pictures show one reason why: in the first, foxgloves and other perennials which have been judged not to be of sufficient quality to grace a show garden are loaded on to a truck for removal. And in the second, buckets of cut proteas and other flowers (which seem to be of excellent quality) are waiting to be removed from the Great Pavilion as others were judged to be superior and were chosen for inclusion on the exhibit. It’s the quality of that judgement in differentiating between the excellent and the super-excellent which can bring a Gold Medal. For the quality oif the plants and flowers is not good enough, no artistry or creative design can compensate.

My wife judy and I will be back at the show at 6am tomorrow (Monday). And tomorrow is the tenth anniversary of the day we met – on Press Day at the Chelsea Flower Show. 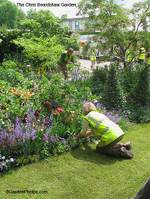 Everyone is working away madly this afternoon. Some gardens are finished and the designers and can stand back, admire their handiwork, hope for a Gold Medal and have a relaxed conversation with journalists like me. Most are still working away.

Watering and finessing the plants on the Chris Beardshaw Garden, which celebrates the garden at Hidcote Manor. One of the finest of English gardens, Hidcote was created by an American – Major Lawrence Johnston.

Most of the plants are in place on the lavender exhibit in the Floral Pavilion staged by Downderry Nurseries and the plants already need watering.

There are many new plants on show, including these two on the exhibit from Hardy's Cottage Garden Plants. Salvia patens 'Dot's Delight' is backed by Physocarpus 'Lady in Red'.

OK... I've updated you and had my coffee here in the press tent, I'd better get back to the show.