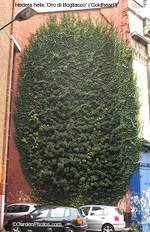 ‘Goldheart’ ivy is one of the most popular of ivies on both sides of the Atlantic. Its brilliant buttery splash in the center of each dark leaf certainly livens up a sunless wall in winter and its pink yonug stems add extra appeal. But recently I’ve been noticing a big problem with ‘Goldheart’: it reverts, losing its yellow coloring.

The first picture shows a huge plant in Aldgate in East London. Click on it for its enlargement and you’ll see a few sparks of yellow but it’s mostly green. The problem with all that green – apart from the fact that it’s dull – is that the plant grows so much more strongly that it both gets out of hand and swamps the increasingly few colourful shoots. 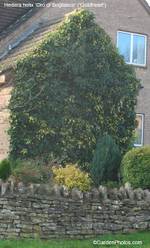 In the second picture, in Northamptonshire, it’s also reverting and is again getting too large for its space. While on a fence round the corner you can see that even relatively small plants about 5ft/1.5m high can revert and the green shoots start to dominate.

The other thing to keep in mind about this plant is that it seems clear that almost everyone uses the wrong name. The correct name is most probably not ‘Goldheart’, but is most likely to be ‘Oro di Bogliasco’ (it was discovered near the Italian town of Bogliasco) or perhaps even ‘Jubiläum Goldherz’.

‘Tricolor’, also consistently with some pink coloring, and ‘Goldchild’, an RHS Award of Garden Merit plant, are perhaps better gold and green alternatives.

Those are scary pictures. Tri-color ivy is what we have in planters and in the ground, behaving nicely and turning a lovely pinky color in the cold.

Yes, even I was surprised by the one in East London.