About Graham Archives Get new posts by email My blog is re-launched!
Previous month:
April 2008
Next month:
June 2008

Well, I had a year off judging at the Chelsea Flower Show this year. And that has enabled me to take a look at some of the native wildflowers in Pennsylvania and New York which are usually at their best while I’m away at the show.

And here’s one of the stars – the lady’s slipper orchid (Cypripedium acaule).

I know of only two places where the lady’s slipper orchid grows in this area and both are inside fences set up to keep out the deer. There are just so many more deer than is natural, that everywhere else they’ve seem to have been eaten. Some people who’ve lived in this area for many decades remember sheets of them – but no more. So it was good to see them, and to see them thriving with young and mature plants as well dry seed pods from last year. But outside the fence – none.

A couple of years ago I bought a pot of small trilliums from a nursery in upstate New York. The tag said they were T. erectum. $10 - bargain. The pictures here show what actually came up. Ten flowers this year, three distinctly different plants.

I’m no trillium expert (there are people who devote their whole lives to studying them), but they look to me like a white form of T. erectum and this has reached about 20in/50cm tall, with two rather shorter plants which look to be different forms of T. flexipes in white and creamy yellow. The first year there were only four or five flowering stems, a few half strength doses of Miracle-Gro seems to have helped.

The nursery, whose name I cannot now recall, we found it by chance, grew a wide range of perennials with just a few pots of trilliums. I wish I’d bought them all now.

Over on the Cool Plants blog from Ontario Canada, Mark Denee has posted about this amazing foxglove that turned up in a batch of ‘Excelsior Hybrids’.

This is an especially impressive example of a form which has been seen occasionally since at least the 1800s. It’s usually represented by what is now called Gloxinioides Group and in this form the spikes are topped by one huge flower the shape of a gloxinia flower. Sometimes this flower is double, and is then sometimes referred to as ‘Monstrosa’ – the names of these, given in Victorian times, have become a little confused and over the years slightly different version turn up under a range of names.

This form in which the flower seems shredded into slender threads is rarely seen and reminiscent of the pure white ‘Anne Redetsky’ and the spotted white ‘Saltwood Summer’ in which every flower on the spike is split into five segments.

It should be possible to fix this startling yellow foxglove so that seed comes reasonably true… first, isolate it from all the others! Then sow all its seed and grow the plants in isolation from other foxgloves – then pull up and discard all but those which retain this dramatic feature. And keep this up until they come true. Might take a few years, though. 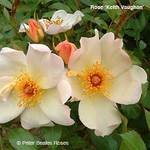 Over eighty new plants are being launched at this week's Chelsea Flower Show. which opens tomorrow, including this lovely new rose,'Keith Maughan', from Peter Beales Roses. I've written up most of the new plants for the Royal Horticultural Society's website... you can read my coverage here. And you'll also find coverage of new and re-launched plants at Chelsea on my RHS New Plants blog.

More coverage of the Show is available online:

No, they’re NOT natives! 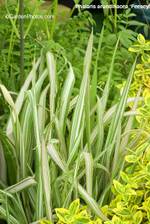 We went to a “Native Plant Sale” at a local environmental education centre yesterday. You know - support the cause, pick up one or two plants for the expanding garden. We’d been before, and found some of the plants on offer not to be native. I’d written them a friendly note pointing this out. They didn’t reply.

Turned out they didn’t take any notice either. The same non-natives were on sale as last time… and still flagged as native. What sort of plants do I mean? The two that really astonished me last time, and did so again yesterday, were Phalaris arundinacea ‘Feesey’ and Filipendula ‘Kahome’.

Of course, plain old reed canary grass, Phalaris arundinacea, is native all over the USA. But ‘Feesey’ is a variegated form found in a garden in Devon… that’s Devon in England! And as for Filipendula ‘Kahome’. I asked the world authority on Filipendula, botanist Peter Barnes, about this plant he told me it was a hybrid between F. multijuga, which is native to Japan, and probably F. purpurea, which is native to – Japan!

Other "natives" at the sale included:
Agastache ‘Blue Fortune’- a hybrid between an American and an Asian species;
Aquilegia ‘Biedermeier Mixed’ – a complex hybrid from Germany in mixed colors with distinctly unnatural upward facing flowers;
Rudbeckia fulgida ‘Goldstrum’ – the species is native, but ‘Goldsturm’ was found in Czechoslovakia!
Gaura lindheimeri ‘Whirling Butterflies’ - the species is a US native (but only in Texas and Louisiana, thousands of miles away from here in Pennsylvania), ‘Whirling Butterflies’ is a garden selection.

You get my point. Here in Pennsylvania these are not native plants. And an environmental education centre should not be pretending that they are just raise a few dollars.

More bird life in the garden

Just a couple of pictures… taken by judy. Thank you!

Our robins have made a nest in a rather exposed place on some trellis under the eaves of the house. In the recent rains, the eggs would have been soaked if mother robin had left the nest. Both birds have been fighting off jays and crows, but robins are about the first birds to lay and if a clutch of eggs is lost they simply lay another. Often they lay two or three clutches anyway.

Down by the lake the phoebes have a nest tight under the eaves of what is laughingly called the boathouse – it’s not big enough for any boat except a little inflatable. 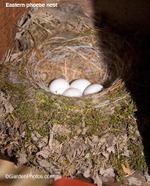 They’ve nested on an angled downpipe by the front door in previous years, with mixed success. Things seem to be going well in their new location, plenty of insects for them by the water. This is the European robin, a red-chested bird about the same size as a sparrow – male and female look the same. This is a favorite British bird, partly because it’s so bold… hopping around the flower beds picking up insects and worms turned up by the gardener’s spade, especially in winter. The males sing prettily in the breeding season, even at night. In Britain, many females migrate south for the winter, the males stay put. It’s related to flycatchers and loves mealworms so much it will take them from your hand.

When European settlers crossed the Atlantic they found a slightly larger red-breasted bird – which, of course, immediately became known as the robin. The two sexes are similar, both with rusty red breasts, but are not identical, and they all fly south from here in Pennsylvania for the winter.

Belonging to the thrush family, the American robin seems to fill the niche that blackbirds fill in Britain – often nesting in gardens, feeding on the ground eating grubs and insects as well as taking fruit from bushes. Here too, the male has an attractive song. Their British relation the blackbird loves dried fruit so much that it too can be tamed; the American robin seems too wary.

Males in both species react strongly to anything red and will even attack a ball of red wool on a fence post.

We have robins nesting on some trellis in the garden here in PA, they’re proving more cautious than European robins and blackbirds, both of which tolerate gardeners well, but are getting more used to us as we work outside. They realise, rightly, that the local blue jays are a far more serious threat.

This plant won’t be going to Chelsea

Rosy Hardy of Hardy’s Cottage Garden Plants in Hampshire was checking the plants in one of her tunnels yesterday. These are the plants that she’s been carefully nurturing for months for the Chelsea Flower Show in a couple of weeks time.

She was trying to decide if she should keep her prize Rheum for her own display in the Great Pavilion or lend it to Show sponsors Marshalls for their Show Garden - “The Marshalls Garden That Kids Really Want!”.  It’s such a perfect specimen that designer Ian Dexter was desperate to have it for Marshalls.

But as soon as Rosy discovered a Mother blackbird sitting on half a dozen eggs the decision was made. The plant stays put at the nursery in Hampshire!

(Not the greatest picture, I know. Just a quick snap so as not to disturb mother blackbird for too long. For US readers - a blackbird is like a robin without the red chest. More on robins next time.)

Fortunately, stocks of the two new plants Hardy's are introducing at Chelsea are unencumbered by surprise wildlife. And both look good. 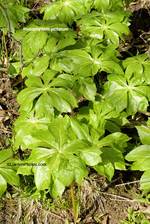 Taking a look at the flowers not yet overwhelmed by Japanese knotweed along the Delaware River in New York yesterday, I found some interesting mayapples (Podophyllum peltatum).

With its pairs of umbrella-like leaves and single flowers hanging between, this is a familiar American woodlander often occurring in broad sweeps in deciduous woods. It’s very distinctive.

In these woods along the river, there was a great variety of leaf shapes and colors – at various stages of development – just a few yards apart. In the first picture, a patch of well developed green foliage represent the familiar type.

The second picture, taken about 10ft from the first, shows a late developer with bronze tinted foliage. On another site a few miles away, the distinction between early green and late bronze was even more apparent.

A pretty pink-flowered form with bronze-tinted leaves is occasionally listed by nurseries, that’s the one in the third picture – not quite flowering in the garden here.

I’ll be checking he flowers on all of them soon.

that germination of mayapple seed is improved if the fruits are eaten by, and pass through, a box turtle!

My new blog on new plants

Going by the impressively catchy title of New Plants and Trials, it began last week on the Royal Horticultural Society’s website. You’ll find it here.

I’m sharing the space with the Trials Office at the RHS garden at Wisley: I’ll be posting about new plants and Ali Cundy, Trials Recorder for the RHS at Wisley, will be posting about the many and varied trials on flowers and food crops which the RHS runs every year.

Why not take a look? I've just started a series of three posts on new hardy geraniums. And while you’re there look over the other RHS blogs including one by the Curator of the garden at Wisley, Jim Gardiner. I’ll post an occasional catch-up list here – just so you know what you’re missing if you don’t pop over and check it out.

That’s my new blog - New Plants and Trials - over on the Royal Horticultural Society’s website.