Love it or loathe it hydrangea 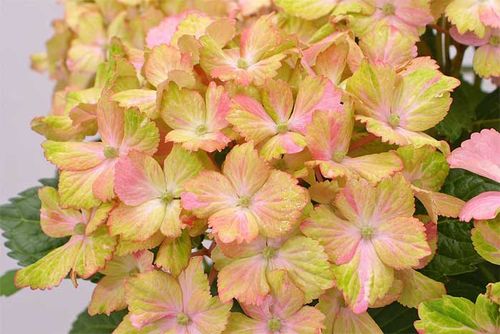 Setting aside whether we really want hydrangeas that flower when all the other similar hydrangeas are finished, a great advantage for many American gardeners is that they’ll still flower well even if a harsh winter kills the growth of the previous year, growth on which most hydrangeas bloom.

Forever & Ever® ‘Fantasia’ is a cross between the pink-flowered ‘Adria’ and an unnamed pink flowered plant whose flowers matured to green. It was selected in The Netherlands in 2003.

But is it for the garden or the garbage? What do you think?

That is one really nasty looking hydrangea! Definitely one for the garbage.

Yeah...its colors are kinda muddled and makes the bloom looks like it is on the downside of its peak. Love me my hydrangeas though!

If its not a lacecap serrata, its not worth growing. These 'Forever and Ever' and 'Endless Summer' types are downright dispicable! And don't even get me started on the recent 'advancements' on the 'Annabelles'!

OK, teza, are you sure you've considered your opinion carefully?! You hate them, OK, I get it!! I have to say, not yet having had the chance to actually grow it, I'm with you - I don't like it. It has this air of being launched just because it turned up in someone's breeding program and looked different. Yes, it's different, but different is not always good. Often it is - but not this time.

It's rather pretty, but there are many plants, shrubs and trees with pink or pinkish flowers, and only a few with true blue ones. I wouldn't grow any hydrangea that isn't blue.

I appreciate your explanation about these new hydrangeas. I couldn't understand why they were called "Endless Summer". Our old hydrangeas bloom all summer until frost. I wonder what the new ones would do here. Maybe twice as many blooms?

It's those funny greenish streaks and blotches... Perhaps the next step is a green flowered one? It'd be interesting to grow it in really acid soil and see if it becomes more blue...

I've been growing this for a few months now (in Pennsylvania), and been mostly pleased with it.

Yes there are pros and cons on any plant, but keep in mind that this one here is different than any other rebloomer offered thus far, for a few different reasons. One is the leaves are narrower like serratas and point upward at a 45-deg angle, and are an extremely dark green. Also if not left to wilt, the flowers take on a pronounced "peach" appearance at times - and which other hydrangeas can do that? Lastly, this is one of the few rebloomers that grows to the "full" 5x5' shrub, ideal for larger gardens. From what I've seen it can also take quite a bit of full sun before dropping or scorching.

I'd imagine that more acid soil would create darker pinks here, and not blue.

If you're partial to lacecaps you probably have a smaller or shady garden, as they're only good and/or noticeable in about 25% of my 1800 sq. ft. of garden space.

Thanks for sharing your experience with this plant, Springwood Gardens. It will be interesting to see if other varieties with the same valuable growth characteristics but with other flower colours are also launched.