About Graham Archives Subscribe to this blog Get new posts by email
Our cheeky chipmunks
Help with crab apples, please With more variegated ceanothus appearing, we now seem have about eight, this seems a good moment to take a look. Any evergreen shrub that features variegated foliage to spark interest in all those months when there are no flowers is well worth having. With ceanothus the flowers and the foliage look good together too.

The first variegated ceanothus I grew, back in the 1990s, and the first to appear was 'Zanzibar' (above, click to enlarge), less often but more correctly known as 'Pershore Zanzibar'. It's still the most often seen in Britain, its broad leaves each with a central dark green stripe and wide lemon-lime edge. It's a sport of the old favorite 'A. T. Johnson'.

This is an upright and bushy plant and from a distance the effect is of a pale yellow cloud, so it makes a good back-of-the-border feature. Then in spring the clusters of pale blue flowers are shown off beautifully. The foliage can be little sparse in early spring, as it tends to lose its oldest leaves in the winter, but new growth soon makes up the deficiency. El Dorado ('Perado'), found as a sport on 'Pershore Zanzibar', is similar, but less bright and with a broader green stripe, and some say its softer coloring helps it integrate with other plants more effectively.

The next I grew - I have a feeling it was sent to me in England by the Seattle plant nut Bob Lilly also in the 1990s - was 'Diamond Heights', one of two variegated forms of the spreading C. griseus. Lurking in the back of my memory is the notion that this was found amongst an extensive planting along a road in the district of San Francisco of that name. With a much lower, more spreading and mounding habit of growth, its deep green center and broad limey yellow edge, and its pale blue flowers in late spring and early summer  - 'Diamond Heights' is ideal trailing over a sunny stone retaining wall.

More recently we’ve had a rather different variegated form of C. griseus, 'Silver Surprise', a sport of 'Yankee Point', which is more upright and bushy than 'Diamond Heights', but less big and bold than 'Pershore Zanzibar', and with the edges of the dark green leaves marked in silvery white. The blue flowers appear in 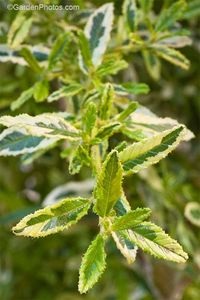 Now, recently introduced, from England, and with longer, more slender foliage ' Lemon and Lime' (left, click to enlarge) is a variegated version of the old favorite 'Cynthia Postan' and has a more airy and refined look than 'Pershore Zanzibar'.

There are more… 'Golden Elan', with pink flowers; 'Bright Eyes', said to be similar to 'Diamond Heights'; 'Blue and Gold', which is said to revert to green. But these I've never seen.

The problem, of course, is that with their progenitors originating in California they're not as hardy as we'd like. Can't grow them here in north east Pennsylvania. Planting against a west or south wall is a big help for the more upright ones, as is good drainage and knocking off any winter snow accumulation.

All we need now is a variegated form of the black-leaved Ceanothus 'Tuxedo'. Wow!

Graham,
Thanks for the article on variegated ceanothus as it confirms that the one I have is 'Zanizibar' or as you say 'Pershore Zanzibar', which I assume means that it was raised (or identified) in the UK Pershore.

Question: What size is it likely to get to and how old?

Well Stel, the plant of 'Pershore Zanzibar' in the picture is about fifteen years old, perhaps more, and has reached about 12ft/3.6m high but is in a very sheltered position. It's getting very bare at the base, now, and I would expect it to be declining soon.

And yes, it was discovered at the horticultural college at Pershore in Worcestershire.