About Graham Archives Get new posts by email My blog is re-launched!
Previous month:
September 2011
Next month:
November 2011

So, it's January already 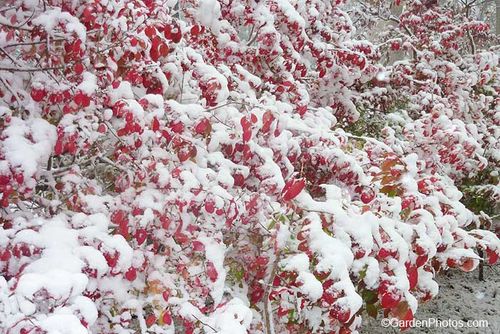 Back in Pennsylvania after a visit back to Britain and what happens - it snows, on 29 October. With up to 10in/25cm forecast before it eases off during the night. But it certainly makes Euonymus alatus, in its brilliant red fall color, look even more impressive than usual.

This shrub is much admired, but also much disparaged, here in the US as although its fall color is spectacular it can be invasive. You know what's coming next, a slightly cynical remark about the almost universal panic about invasiveness when any non-native plant throws a few self sown seedlings. Well, in some areas it can certainly be a problem. But we've been here for over ten years, and seedlings from these plants have popped up all over the place. But none has grown to more than a few inches - because the deer eat them.

In some cases, like Japanese barberry (Berberis thunbergii), invasive plants take hold because the deer eat all the native competition. In this, it seems, the deer are doing us a favor.

UPDATE Just after I posted this we lost power. The weight of snow on the many trees still in leaf brought them crashing on to the power lines. So we built a fire, and we emptied the fridge and put the contents outside the front door where it was below feezing. We had about 12in/30cm of snow in all and the power came back a few hours ago - about 28 hours later. We intended to deliver the next book to the publisher first thing Monday morning. Sorry... no power = no computers... Late Sunday night and we're still getting it ready. It would have been different in the days of slides and typewriters. 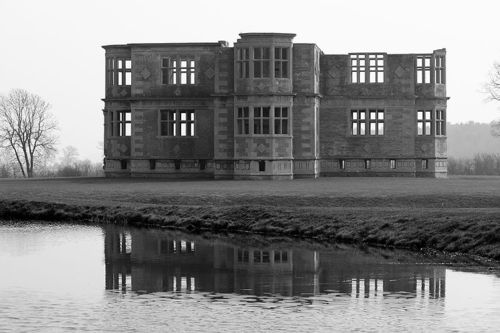 A transatlantic visit to Northamptonshire’s Lyveden New Bield, in the heart of England, the other day. This is an unfinished “summer house” abandoned in 1605, before its completion, when its creator Sir Thomas Tresham died and his son featured in the infamous Gunpowder Plot (for North American readers: The Gunpowder Plot was a treasonous plan to blow up the British king by igniting barrels of gunpowder in the cellars under the House of Lords where he was opening parliament).

What remains at Lyveden is a roofless and floorless house through which we wandered, inspecting the graffiti from 1799, plus a recently planted replica of the original orchard featuring many fruit varieties from the early seventeenth century. There are also spiral “snail” mounts, moats, raised terrace walks, a huge grass labyrinth, and red kites soaring overhead.

The transatlantic team was made up of one Brit, me, plus my American wife judywhite, plus the splendid American garden writer and editor, and distiller(!), Fiona Gilsenan, plus Fiona’s ten year old son Julian (To his mum: “You're so lovable and warm. Like bacon, but not crispy.") And thanks, Fiona, for the sample of gin from your boutique distillery Victoria Spirits.

The orchard at Lyveden is going to be fascinating. Grown hard, it’s slow to become established but with its wealth of old varieties I look forward to the day when the fruit is available to sample or even to buy.

And after a visit, there’s a walk through the woods to The Kings Arms at Wadenhoe on the banks of the River Nene for lunch. But we drove the few miles over to The Chequered Skipper at Ashton, named for a rare British butterfly, on the estate of the late Miriam Rothschild. An authority on the sex life of fleas, she also pioneered the use of native wild flowers on roadsides. “I must say, I find everything interesting,” she once said.

Foliage for cutting and for the garden 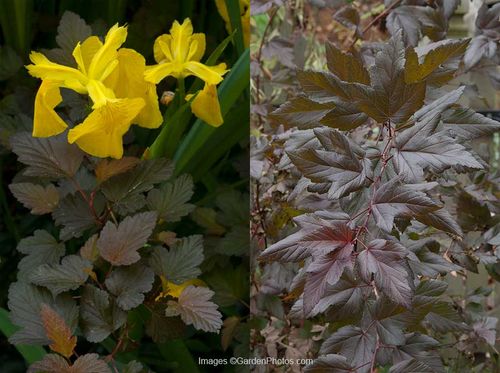 Those of you who’ve been following this blog for a while will be aware that I’m a big fan of Physocarpus – ninebark as it’s known in North America – and especially of the variety Coppertina (‘Diable d’Or’). And it turns out that I’m not the only one. The Association of Specialty Cut Flower Growers has named Physocarpus Coppertina as one of its three Cut Flowers of the Year.

As soon as I heard this judy went out and cut eight or nine stems from the plant outside my window. OK, we let a few of the stems get dry when the water in the vase got low and we forgot to top it up. But even those stems lasted almost two weeks before they started to look sad – with no special treatment and no flower food. And those whose stems never got dry lasted almost three weeks and even then it wasn’t as if they were dead… just not really looking lively any more. They were in fairly good light and the only change was that they steadily became less bronze and more green. Later, I tried a couple of stems in very poor light – but they didn’t really like it.

Physocarpus Coppertina is a tough and resilient shrub which after a year or two in the garden produces so much growth that cutting shoots for the house won’t make it look thin. In the fall, after a shower, its bronze foliage gleamed beautifully and with Hosta ‘Christmas Tree’ at the base it makes a lovely picture.

But our Coppertina plants have never bloomed or fruited well. They’re in good light all the time but not in full sun for more than a few hours a day – perhaps it’s not enough. But, frankly, it doesn’t really matter. With their amber new shoots maturing to rich bronze and with its proven value when cut for the house, it’s one of the first shrubs I’d choose for a new garden.

But you know… I really don’t find them so very interesting. 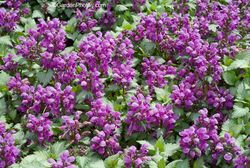 Two more pieces featuring my new book, Planting the Dry Shade Garden, have recently appeared in Britain. Last weekend The Guardian ran my piece Gardens: dry shade and today The Irish Times ran a piece called Dealing with shade in the garden by Jane Powers, their regular garden columnist. The book has also been chosen as a Christmas book selection from The Royal Hortiultural Society. When you’re trying to identify local wild flowers, or see if a plant is invasive in your area, plant distribution maps for individual species are invaluable. Plant distribution maps simply show you where in the country individual species grow. Britain and Ireland’s online plant map website, the Online Atlas of the British and Irish Flora, is superb.

. On the site, you simply input the common or botanical name of the plant, and the next page brings you a fairly basic map together with a text summary.

However, click on the Maps button and then on Link to Interactive Map and you come to a topographical map with the distribution of the plant clearly marked. You can zoom in and out, and there are other interactive features. The country is divided into 10Km squares and the map shows the squares in which the chosen plant grows. This  is the distribution of Pinesap, Monotropa hypopitys, that I wrote about here recently, in Britain and Ireland (above, click to enlarge).

The site allows you to zoom, overlay county boundaries, get information on the records in individual squares. I’ve zoomed in to illustrate mostly just England - which is about the same area as our state here in Pennsylvania. Produced by the Botanical Society of the British Isles and the Biological Records Centre I have to say, this is absolutely brilliant.

In North America, individual states have their own flora mapping projects. Here in Pennsylvania, the Pennsylvania Flora Project eventually brings you the same map as the USDA site. The Calflora site is a much more impressive resource for California, again with sites shown on topographical maps.

Knowing whether a plant has ever actually ever been found in your area can be a big help when trying to identify wild flowers, especially when trying to distinguish between similar species.