About Graham Archives Subscribe to this blog Get new posts by email
Finished the latest book!
Ivy reveals how nature is nuanced 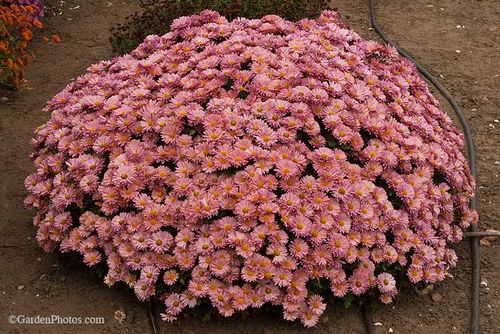 Taking a look at the Royal Horticultural Society’s trial of hardy chrysanthemums a week or two back, I was pleased to see some recently developed American varieties included. And they’re very different from the old Korean chrysanths, also American, but developed almost eighty years ago.

Korean chrysanths, including ‘Sheffield’, ‘Venus’ and ‘Mary Stoker’, and others like them, tend to be medium height upright plants with all the flowers towards the top. Sort of traditional looking. They were originally developed in Connecticut from the 1930s, where it’s colder than in Britain, so in Britain and much of the US they’ll survive the winter.

Varieties in the Mammoth Series, developed by the University of Minnesota, are entirely different. They develop into low rounded domes and at their peak (top, click to enlarge) are covered with flowers. “Plants are hemispherical in shape with flowers almost completely covering the outside surfaces of each plant, like a pincushion. Previous mums, like most other flowers, bloomed only at the top of long stems. Shortly thereafter (after their first introduction), all U.S. breeding programs were producing garden chrysanthemums with this plant habit. The cushion is now the primary plant phenotype in the market.” So says a scientific paper on the plants in HortScience.

Plants in the Mammoth Series are hardy too, hardier than Koreans; they’ll take -35F (that’s -37C)! That’s a lot of frost. 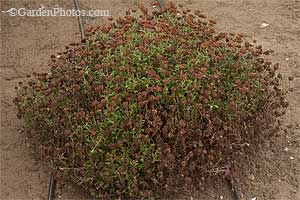 covered in coral red flowers with yellow eyes. But, while this is an impressive looking plant, nearby is ‘Mammoth Lavender Daisy’ (right, enlargement not necessary) which is long gone.

OK, that may not be entirely fair; ‘Mammoth Lavender Daisy’ may have looked terrific a few weeks earlier although two plants in the same series really should flower more or less together.

The bigger question is how, exactly, do we use these footstool chrysanthemums in the garden? Their tight hemispherical shape makes them almost impossible to group with other plants. I once saw them planted on a slope, tight against some steps, and they softened the jagged line of the steps beautifully. But you couldn’t use them in an autumn border with other perennials.

Commenting on the use of the footstool plants...I live in southeastern PA. In my neighborhood, it seems the Mammoth series are intended as "disposable plants" for the porch. To see so many plants discarded at the end of the season has given me an uncomfortable feeling when I drive through town... When I think of all the fertilizer, water, and fuel that was used to make these plants available to us, only for them to be destroyed in a few weeks....They do put on quite a show, though.

I sympathize, Gardentina... I know, this "disposable perennial" - what I suppose you might call the "annual perennial" - idea is becoming much more common here in the US. Perfectly good, hardy perennials are treated as of value for just a few weeks and then thrown away. They're promoted as lasting for years - the winter hardiness of these 'mums is often highlighted - but still thrown away when the flowers fade. Seems so bizarre to a Brit used to perennials being, well, perennial.

I am going to root cuttings of a few of the mammoth series next spring and plant them directly into the garden once well rooted. With this early planting and no pinching, I am hoping they will loosen up a bit.
It is odd that several in the series bloom at different times.
I love the Koreans. You can easily fill large swaths.