Ivy reveals how nature is nuanced 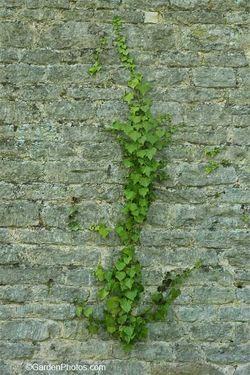 In North America, in spite of uncertainty about exactly which species is involved, ivy is widely condemned as an invasive plant that smothers natural vegetation. And it’s true, whether it’s Hedera helix or H. hibernica that’s causing the problem, ivy can be a menace in some areas although in much of the country it doesn’t grow at all and in other areas it remains well behaved.

But seeing this ivy on the wall of an English stone cottage (left, click to enlarge) reminded me that ivy can cause other problems even in Britain where it’s a valuable native plant popular with insects and birds and a widely popular ornamental climber for walls.

It has clearly once covered this limestone wall but has been cut off at the root and most of the growth removed. But it’s still growing, rooting into the mortar and renewing its hold. Looks like a job for Round Up, now, because the mortar traditionally used between the stones is relatively soft; when it’s pulled off, the mortar tends to come away too. Click he picture to enlarge it and you can see.

On modern walls built of hard bricks and hard mortar, a completely opposite problem can arise. In the picture below (click to enlarge), the bricks and mortar are so hard that the short aerial roots with which ivy stems grip their support have failed to take hold well. The weight of a rainstorm has pulled the ivy right off the wall.

These situations serve to remind us, on both sides of the Atlantic, that enthusiasm for a plant, and condemnation of it, are not simple black-and-white issues. Nature is nuanced, rarely is a simplistic view justified. 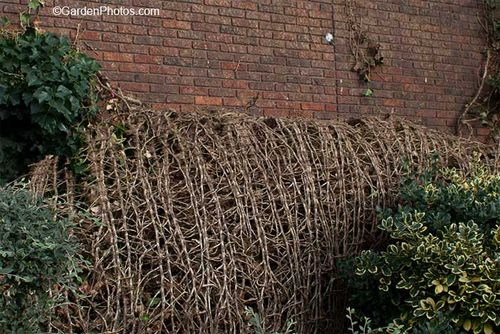 I saw a Parthenocissus quinquefolia growing on the roof of a house, with no root attached, similar to the boston ivy. There are good places to use about any plant--but horrid places as well.

Absolutely Liz, every plant has its place and and there are some places where some plants should not be seen. But the routine condemnation of anything that someone thinks is invasive is ridiculous.