About Graham Archives Subscribe to this blog Get new posts by email
Help with variegated euphorbias, please
Single-flowered dahlias on the rise

New primroses: Worth a little extra

I had a bit of a shock recently. I was exchanging emails with Pat Fitzgerald, the Irish grower who’s taken on the production and marketing of a whole new range of hardy garden primroses developed in Ireland by Joe Kennedy: Kennedy’s Irish Primroses. There are some gorgeous colors amongst his nine varieties and in many of them the flowers are set against rich bronze-purple foliage. They’re lovely. And they’re hardy. But he’s having trouble selling them at a price which justifies the many long years of work that has gone into producing these gems. Above are 'Cladagh' (left, click to enlarge) and 'Avondale' (right). 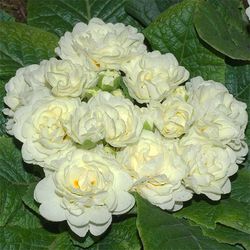 As it happens, I’d just had a similar exchange with David Kerley, who created the new generation of double flowered primroses, the Belarina Series. And he told me he liked to downplay the very idea that they were primroses because garden centers and commercial growers equated primroses with cheap and gaudy seed raised varieties and were reluctant to pay the premium that his exceptional doubles deserved. hese include 'Belarina Cream' (left, click to enlarge) and 'Belarina Nectarine' (below, click to enlarge)

I’d always thought that the word “primrose” had this romantic association with the English cultural plant heritage. For me, the word conjures up an idealistic reverie of a lost pastoral age… Like the old English traditional folk song: The Banks of The Sweet Primroses. Not for everyone, it seems.

Easter in a range of clashing colors to be churned out in bulk for garden centers and markets – and then thrown away by the gardener when the flowers fade. [No picture, they're just too horrible - here's a link, though, if you have your sunglasses on.] The result is that it can be tough for really special primroses to make their mark.

So, here’s the thing. It’s like comparing a burger with a sirloin steak. They both contain beef, but they’re entirely and utterly different. You pay for a good steak and it’s nothing remotely like a burger; you pay for a burger – and a burger is what you get.

It’s the same with primroses. You pay for a Belarina or a Kennedy’s Irish Primrose and you get something really special that will last for years. Nothing remotely like the primrose plants, in clashing colors, that you find stacked outside the supermarket and which fade away after their first spring. Good plants are worth paying extra for.

* British readers can catch my piece about new primroses and polyanthus – along with another piece about cortaderias, pampas grass - in this week’s print edition of Amateur Gardening magazine  (issue dated 15 September).

I had to do a double take on those cream colored double primroses. Not considering size, they looked like camellias in the picture. As a matter of fact, all the new varieties look worthy of being in a corsage or florist-designed bouquet.

They do look lovely, don't they... Primroses as cut flowers, there's a thought...