About Graham Archives Get new posts by email My blog is re-launched!
Previous month:
December 2012
Next month:
February 2013 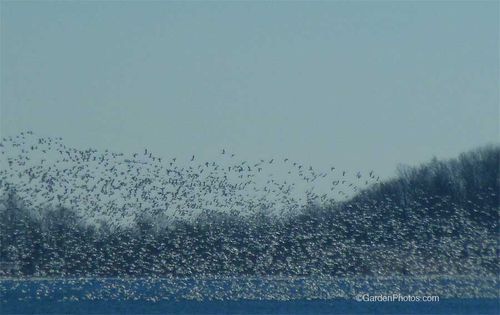 Yesterday, we took a fifty mile ride over to the Merrill Creek Reservoir in Warren County, New Jersey. To see the snow geese. And they were there. Thousands of them.

Because the reservoir is so deep, it doesn’t freeze. So there they floated, in their thousands. Just a few miles away the great Delaware River was iced over.

They kept together, the snow geese, close in this icy water to which they’d migrated from the frozen north to spend a few winter months in a less frigid climate. They stretched out in a long white stripe of close packed feathers across the blue water, and rose into the air in a lazily exuberant white eruption of wings. Then settled back on the water and closed up tight, for warmth as much as for company.

In this month’s issue of The American Gardener, the membership magazine of The American Horticultural Society, I’ve written a piece about plants that come true from seed – and those that don’t. And, in particular, it set me thinking about pulmonarias.

Many of us know that individual Primula plants have flowers that come in one of two forms: some have “pin” flowers, some have “thrum” flowers. The difference is that in pin flowers, the stigma (which is the female part of the flower where the pollen needs to land) is on a long stalk and so visible in the center of the flower. The anthers, which carry the pollen, are on short stalks low down in the throat of the flower. In thrum flowers, it’s the other way round.

Pollen that a bee picks up on its body from the anthers of a pin flower buried down the tube of the flower is in precisely the right position to pollinate a thrum flower – which has its stigma positioned back down in the tube in exactly the right spot. So when seed is set, the pollen almost always comes from a flower of a different plant. So the seed is the result of hybridization. Who knows where the pollen came from? The only thing that’s almost certain is that the pollen did not come from the plant setting the seed – so the resulting seedlings will be different from the plant that produces the seed.

This is true of primulas - but it’s also true of pulmonarias. You can see it clearly in the pictures at the top. The thrum-eyed American-bred ‘Dark Vader’ (left) with the ring of five anthers clearly visible; and the pin-eyed British-bred ‘Cleeton Red’ (right), with the stigma plain to see, on the right (click to enlarge).

So, the lesson. Pulmonarias tend to shed their seed and often quite a lot of it germinates. But the seedlings 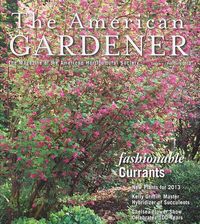 are likely to be all hybrids and not identical to the seed parent. So please don’t pass the seedlings to friends with the parent plant ’s name on. If you’d like to pass on the plant, pass on a division. “Growing giant pumpkins is no longer a hobby - to many it has become a competitive sport! So if you want to grow the biggest and the best, you need to start off with the very best genetics.

“At 9pm on Saturday 19th January, the European Giant Vegetable Growers Association held a live auction of pumpkin seed varieties as part of www.bigpumpkins.com chat room. A total of 23 lots were included in the sale.

“Poised by their computers, 67 enthusiasts logged on to take part in the bidding which went on for almost 4 hours. However, lot 23 was the one everyone was waiting for; it was seed from last year’s world record-breaking pumpkin - a hybrid raised by Ron Wallace of Greene, Rhode Island, which weighed in at 2009lbs (911Kg) at Topsfield Fair in the USA. Ron’s was the first ever pumpkin to weigh more than 2000lbs. After a frenzied bidding war, a single seed from Ron Wallace’s prize-winner was sold to Thompson & Morgan for €200.00. 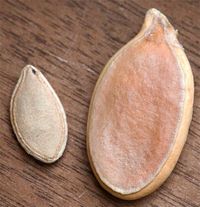 [You can see how big it is compared to a normal pumpkin seed (right, click to enlarge).]

“Managing director, Paul Hansord said, “When compared to the usual giant pumpkin seed price of around 46p ($0.73), this seems extortionate. But we’re paying for the pedigree. If you want to grow a really huge pumpkin, you need to start with record-breaking, genetically proven, premium seed.”

“Auctions of pumpkin seed have been running since 1997. Trading encourages growers and enthusiasts to raise stronger and more competitive hybrids. The highest price paid for a single pumpkin seed was in 2011 from a previous record-breaker which weighed 1810lbs (821Kg). The price was £1009 ($1600); an exceptionally high price due to the fact that the fruit had only produced 5 seeds.

“Thompson & Morgan is now searching for a ‘growing partner’ with specialist knowledge of growing giant vegetables to help raise this precious seed in an attempt to break the record for the world’s heaviest pumpkin.”

T&M’s propagator must be mightily relieved they’re looking for someone else to grow the seed for them. Can you imagine the phone call? “Hello Paul. You remember that pumpkin seed you paid a fortune for? Well, down here at the nursery it’s been a very bad year for slugs…”

You can read more about Ron Wallace and his pumpkin in The Boston Globe.

I'm back after a turn-of the-year hiatus* – with news of my new book.

So when you look at a plant in flower, or with colorful foliage, at the garden center or in the nursery, ask yourself a question: What else does it do? If what you see is all it does, perhaps you need to chose a different variety.

The slide show above (hover your mouse point over it to take control) will give you plenty of ideas and think too about these fantastic multi-season Powerhouse Plants:

The list of these multi-season performers goes on, in fact the list goes on to number an amazing five hundred and ten plants! And I discuss them all in my new book, Powerhouse Plants, with gorgeous photography mainly by my wife judywhite.

So my new book, Powerhouse Plants, reveals over five hundred plants with more than just one season of interest. Bargain planting at its best. So when you’re shopping for plants and are tempted by what you see, ask yourself the question: What else does it do?

* In North America, the word “hiatus” simply means a break, with no special connotations; in Britain, it also means a break, but there are always overtones of drama or something out of the ordinary. Here, we’re going by the American version…

Posted at 02:00 PM in Books, Powerhouse Plants For All Seasons | Permalink | Comments (4)