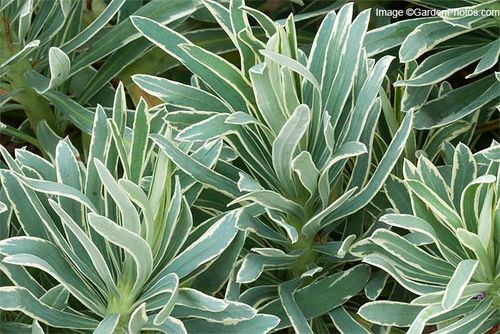 I recently took on the unexpectedly difficult task of writing a piece about variegated euphorbias. The piece is published in the March 2013 issue of The Plantsman, the Royal Horticultural Society magazine for serious plant nuts. The problem with these undeniably dramatic forms of Euphorbia characias is - not to put too fine a point on it - that it's hard to tell one from another. It’s not quite that “they all look the same” - but the fact is that a lot of them do.

So I appealed here on my blog for some help on how to sort them out, and on their origins, and I was delighted that quite a few people, from both sides of the Atlantic, responded; some of them I quote in the piece. Plantspeople are unfailingly helpful – you just have to ask. There wasn’t enough space in the magazine to list everyone who helped, so I’ll do so at the end of this post. Thank you.

The RHS trial of forms of Euphorbia characias and its hybrids, that I mention in my article, includes some variegated types. It is to be planted this spring and then assessed over the following years by an expert panel. Should be very interesting...

My favorite is probably ‘Glacier Blue’ (above, click to enlarge). At about 18in/45cm it’s manageable in most gardens and its bright, blue grey foliage is edged in creamy white. I also like the rarely seen ‘Silver Shadow’ (below, click to enlarge) with its spiral of growth; its slender variegation allows it good vigor. 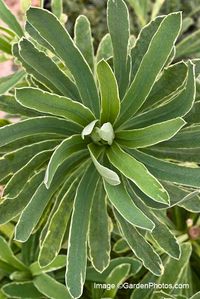 The other problem with these plants (in  addition to identifying them correctly) is that often they’re rather short lived. Here in north east Pennsylvania, they’re summer container plants; the winter is just too cold. They’re Mediterranean in origin, and it never gets down to -20C/-5F in Portugal as it has here this winter. So they’re wiped out. (The dependably hardy ‘First Blush’ is a form of E. epithymoides and so not covered by the article.) But, even in Britain or the Pacific North West, wet soil, strong winds, pruning at the wrong time and other problems often restricts their life to a year or two.

But Gina Falcetti, New Products Grower at Skagit Gardens (wholesale only, no retail) in Washington state, where ‘Glacier Blue’ arose, may have the answer. I quote her in the article:
“I think improper pruning is responsible for many lost plants. Most people seem to want to let them go all season and prune after winter, or to whack them back directly after bloom. I find it necessary to be patient, wait after bloom is past until new shoots are visible at the base and are about 1in/2.5cm long, then to cut back all the way down to these new shoots.

“This often means there is an awkward month or two when you really want to cut them back, but shouldn’t. If they are cut when there are no new buds emerging they will often just die, or produce a lot of shoots that revert. This needs to be done annually, not after the plants have been let go for a couple of seasons, or the stems get too thick and woody and re-break is weak or uneven.”

In addition to Gina Falcetti, I’d like to thank the following growers and breeders and gardeners for their help with this piece: Judy Barker, Mary Benger, Bob Brown, Brian Dockerill, Gary Doerr, Gary Dunlop, Janet Egger, David Glenn, Paul Gooderham, Chris Kelleher, Andrew Mikolajski, John Notton, John Fielding, Pat Hockey, Jo Howe, Geri Laufer, Paul Picton, Lita Sollisch, Graham Spencer, Tim Walker, Don Witton and the many people in whose gardens I’ve inspected these plants over the years. I apologize if I’ve left anyone out, and for the fact that there was not space to include every piece of information received.

I must be mad, now I’m working on a piece on Nepeta (catmints) – another group where “they all look the same”!

I am unable to see 'Silver Shadow' that you talking about.Life of this plant is short than other plants.They even need more care.

As a gardener, I looked Euphorbias as an outstanding choice for my garden. Yes very true that life of these plants are shorter than other which needs more adequate care. Great share!!

I am more engrossed with the growing numbers of great blog on gardening,this one has a lot that anyone can learn.Thanks for sharing.