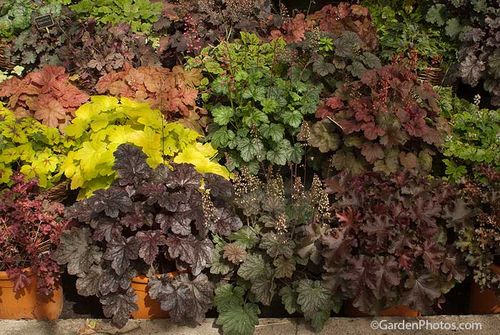 We’ve all seen how, in the last twenty years, heucheras seem to be everywhere: borders, pots and even hanging baskets. And it’s true that for foliage color they’re simply unsurpassed in their range of colors and patterns. After initial pioneering work from Charles Oliver in Pennsylvania, Dan Heims and his team plant breeders at Terra Nova Nurseries in Oregon have led the way, with over 400 introductions. Now breeders in Europe are getting in on the act.

In Britain two nurseries, the splendidly named Heucheraholics and Plantagogo, are streets ahead of everyone else in the wide range of heucheras they offer and the promotion that they’ve given heucheras over the last few years. In the past, I’ve asked both of them to advise on the best heucheras: Jooles and Sean Burton suggested heucheras that change impressively over the seasons, and Vicky Fox of Plantagogo suggested heucheras with both good flowers and good foliage. 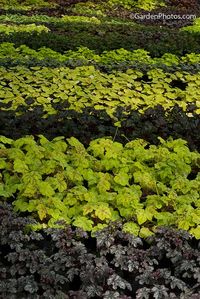 But when I visited the Heucheraholics nursery, in Hampshire in southern England, last summer I asked Jooles and Sean to be more specific, to be ruthless: which are the best of the best? They picked out four:

‘Blackberry Jam’ (‘Dolce Blackcurrant’ in the US) has silver leaves with black veins and crimson undersides, with a lovely shimmer (below, left, click to enlarge). The vigorous and tough, British-bred ‘Crimson Curls’ is very well ruffled, with green and bronze leaves which are dark red below. ‘Lime Marmalade’ (below center) has ruffled lime green foliage and the best sun tolerance of the lime leaved varieties. ‘Sashay’ (below right) has wonderfully ruffled green foliage, the ruffles revealing the purple undersides.

Next time I see them I’ll have to ask them which they’d choose if they could only grow one!

As it happens, Britain’s Royal Horticultural Society has just revised its premier plant award, the Award of Garden Merit, and updated its list of the best heucheras for Britain. Here they are: ‘Can-can’, ‘Fireworks’, ‘Magic Wand’, ‘Molly Bush’, ‘Purple Petticoats’, ‘Raspberry Regal’, ‘Regina’, ‘Sashay’ and ‘Scintillation’. There were additions to the old list from ten years ago, but they did cut these: ‘Blackbird’, ‘Burgundy Frost’, ‘Chocolate Veil’, ‘Quilter’s Joy’, H. sanguinea ‘Alba’ and ‘Smokey Rose’. They need a few newer varieties, don’t they…

I’ll be looking at America’s favorite heucheras her soon, and at the revised RHS Award of Garden Merit next time. 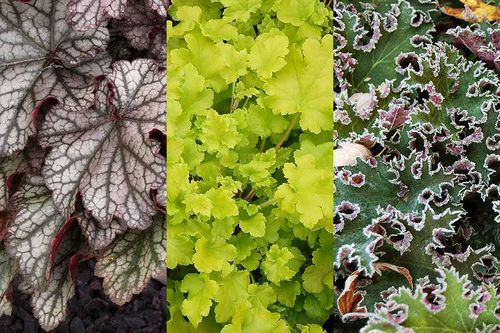 Glad to read the list of the best heucheras for Britain...Tremendous work with this blog. It was really convenient from a reader’s perspective.

Thanks, and look out for my post on the best heucheras for North America - coming tomorrow.