About Graham Archives Get new posts by email My blog is re-launched!
Previous month:
April 2013
Next month:
June 2013 This is my third monthly piece about Powerhouse Plants, Plants For All Seasons which don’t flare and fade with two weeks of flowers and fifty weeks of boring leaves. These are plants which provide color and interest for at least two seasons of the year and not just a quick flush of flowers. So when you look at a plant in flower at the nursery or in a catalog, always ask: What else does it do?

My new book, Powerhouse Plants, includes details of over five hundred plants that do something else at another season. And every month in Gardener’s World, Britain’s top-selling garden magazine (and also available in the US) I focus on one very special Plant For All Seasons, highlighting three features which bring color to the garden at different times of the year. And every month here on my Transatlantic Gardener blog I bring you details of yet another – this time, Kolkwitzia amabilis Dreamcatcher (‘Maradco’).

Basically, this is a much improved version of a familiar beauty bush, Kolkwitzia amabilis, which flowers for just a few short weeks in late spring and early summer. Dreamcatcher adds months of fascinating changing foliage color.

In spring, the new shoots are coppery red, then the foliage turns yellow as it matures. Later, it becomes chartreuse with gold hints through summer and in the autumn, and it changes again becoming orange and gold in a final fall flourish.

In my experience Dreamcatcher also makes a lower, more spreading plant than ‘Pink Cloud’, the usual form seen, and the larger of our two seven year old specimens is about 3ft/90cm high and noticeably wider. More widely grown in North America than in Britain, British gardeners should hunt it out.

You can read more about Kolkwitzia amabilis Dreamcatcher (‘Maradco’) in a blog post here back in 2010.

Posted at 01:42 PM in Powerhouse Plants For All Seasons, Shrubs | Permalink | Comments (0)

The winner of the Chelsea Flower Show 2013 Plant Of The Year was announced late on Monday. The award goes to Mahonia eurybracteata subsp. ganpinensis 'Soft Caress'. A selection of a Chinese species, made in Georgia, I feature it on my Royal Horticultural Society New Plants blog in September last year. This is what I said:

Mahonias are amongst the most impressive and dependable of flowering shrubs – but they have a problem. They’re spiny, sometimes viciously spiny. Not any more.

Mahonia eurybracteata is a modestly sized evergreen shrub that grows wild in five provinces of south west China. Reaching 3-4ft/90-120cm in height, and about as wide creating a more or less rounded plant, the long slender divided foliage is slightly greyish green, soft to the touch and not at all spiny or holly-like as so many varieties are.

From August until October the flowers appear, upright clusters of spikes at the tips of the shoots are lined with slightly fragrant, bright yellow flowers that last for many weeks and are followed by blue berries.

‘Soft Caress’ is a new form selected for its extra hardiness and for foliage which has a more noticeably silvery sheen. The leaves may also take on reddish tints as the days shorten and the nights become cooler. ‘Soft Caress’ is neat enough to be grown in a container, or is happy in a sunny or partially shaded border where it appreciates fertile, but well-drained soil.

‘Soft Caress’ was selected by Ozzie Johnson and Karen Stever from a group of seedlings of Mahonia eurybracteata grown at ItSaul Plants in Chamblee, Georgia.

In Britain you can order Mahonia eurybracteata ‘Soft Caress’ from Crocus and from Gardening Express.

In North America you can order Mahonia eurybracteata ‘Soft Caress’ from Wayside Gardens and from Springhill Nursery.

Plant Of The Century

It’s a hundred years ago this year, in 1913, that the most famous flower show in the world, The Chelsea Flower Show, was first staged and to mark the centenary of the show the Royal Horticultural Society is asking gardeners to vote for the Plant Of The Century.

They’ve chosen a plant from each decade, and each is introduced on video by a gardener of the appropriate generation - from a 92 year old ex-paratrooper to an eight year old schoolgirl. Anyone can go online and vote for their favorite. These are the plants.

Not everyone is happy with this list, I have to say. As one Royal Horticultural Society insider (who had better stay nameless) has already emailed me: “Typical RHS, they’ve ignored all the annuals and patio plants that people actually grow and included two shrubs that only grow on acid soil which most of the country doesn’t have.” Hmmm… Got a point, there…

Me? I’d probably vote for Iceberg rose although now that the sulfurous pollution that kept mildew and blackspot at bay in the 1950s is gone it’s a martyr to disease. Or the Russell lupins. But I think Geranium Rozanne will probably win, especially as the nursery that sells it has its PR firm campaigning on its behalf.

Click on the images to see each one enlarged. Check out all ten plants on the Plant of The Century webpage, or click the plant links above to see details of each plant an cast your vote. Voting closes at 12 noon BST Friday 24 May, 2013. Which do you think is Plant Of The Century? 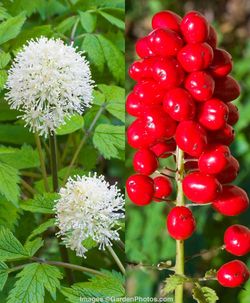 Powerhouse Plants are Plants For All Seasons, plants which don’t simply do their one thing and then sit there looking dull for the rest of the year. These are plants with impact at two, three or perhaps four different seasons. They provide so much more than just a few short weeks of flowers. So when you look at a plant in flower at the nursery or in a catalog, always ask: What else does it do?

You can find details of over five hundred plants that do something else at another season in my new book Powerhouse Plants. And every month in Gardener’s World, Britain’s top-selling garden magazine (and also available in the US) I focus on one very special Plant For All Seasons, highlighting three features which bring color to the garden at different times of the year. This month, it’s Viburnum plicatum subsp tomentosum 'Mariesii'. But here I thought I’d show you another, a perennial: Actaea rubra, the red baneberry.

First, the bright juicy spring shoots emerge and then around this time of year, depending on the season, and this season is a late one, the leaves have expanded and make a fine fresh green background to the fluffy heads of white flowers opening from creamy buds.

Then it’s not long before the rather dramatic change takes place; the flower heads stretch and the berries form, in bright and shining and scarlet red. Quite a different look, two quite different appeals from the same plant.

You might also like to take a look at Actaea pachypoda ‘Misty Blue’ (‘Pewter and Pearls’ is similar): the same white spring flowers; then white berries held on red stems – but with the bonus of blue-tinted foliage.

Posted at 09:00 AM in Perennials, Powerhouse Plants For All Seasons | Permalink | Comments (3)

Have you seen these double primroses? 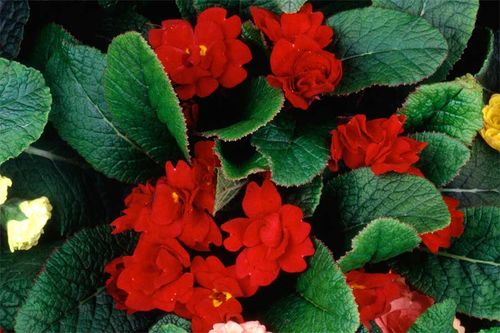 In the last ten years, many of the old, double flowered primroses have vanished from our gardens, on both sides of the Atlantic. A combination of virus disease and relentless weevil attack has led to the disappearance of many of these captivating, and very hardy, spring perennials. Grown in Britain. Brought to America they’re part of our horticultural heritage. But they’re disappearing.

The British garden plant conservation charity, Plant Heritage, once oversaw three National Collections of double primroses in private gardens. These too are gone. But Caroline Stone, a keen gardener from North Cornwall in Britain’s West Country, is determined to establish a new National Collection and preserve those wonderful old double primroses.

“I started with five or six double primroses,” she told me, “and having had some success winning prizes with them at the Cornwall Garden Society Spring Show decided to get a few more. It quickly became obvious that there were very few old varieties being sold - but the more difficult it was to find them, the keener I got. Now, I have around seventy varieties ranging from some of the very old to the modern, and with several that occurred naturally in the wild. I hope to be able to get them growing strongly and propagate them to ensure they survive.”

There are two varieties of double primrose that Caroline is especially keen to track down. ‘Red Velvet’ (above, click to enlarge) was a good red, and was quite a vigorous variety – it may still be around. Many of the reds are a crimson shade, but this was a proper bright red. And the slender red edge to each leaf is very distinctive. But now, not so many years later, the plant has become impossible to find. Hopleys nursery launched a range of double primroses that had been selected from Barnhaven seed in New Zealand in the early 1980s. One, ‘Torchlight’, a neat upright double yellow, was featured on their catalogue cover and received an Award of Merit from the RHS at Chelsea in 1983. But it too seems to have disappeared.

If you grow either ‘Red Velvet’ or ‘Torchlight’ in your garden, in Britain, North America or, perhaps, New Zealand, Caroline would be thrilled to hear from you. You can email Caroline and tell her about your plants.