Book Review: Where Do Camels Belong? by Ken Thompson 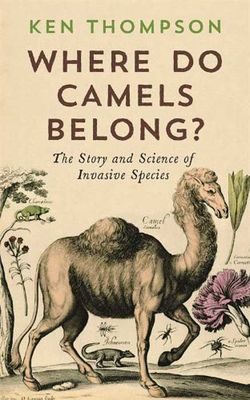 In Britain, this invaluable book is subtitled The Story and Science of Invasive Species; in North America, the more provocative subtitle is Why Invasive Species Aren't All Bad. Both are appropriate; look dispassionately at the science and it’s clear that invasive species are not all bad.

So often, discussions of the whole issue of natives and non-natives (plants, animals, insects and the rest) are run through with the repetition of bold assertions, unproven by science, that it’s a relief to find a book in which the whole issue is viewed more calmly, in a broad context, considered over time, and backed by solid science. It's just what we need: more unbiased science and less thoughtless hysteria – and that is what this book provides. And it’s all presented in a lively, and very readable.

Ken Thompson discusses how we define “native” and how we stretch our objective definitions to take account of subjective impulses; he reveals how little we actually know about so many non-native species and how very few ever cause problems; he examines whether the most hated invasive species really are as destructive as we’re told and points out that some have positive impacts; he discusses how natives and non-natives can happily co-exist in the same habitat; he applies science to the myths surrounding invasive species.

One of the striking features of the response to the presence of non-native plants, in North America in particular, is the frequency with which they’re simply removed – just in case – rather than studied. As Dr Thompson points out, the proportion of non-natives that arrive in natural habitats and end up causing problems is minute. And when non-natives are studied over the long term, we sometimes find that their initial dominance is followed by a sharp decline followed by a stable balance.

I won't steal the author’s thunder by summarizing his invaluable discussion of how we define the word “native”, except to say that picking any date as a cut-off point after which an arriving species is declared an alien is clearly arbitrary and ignores the fact that ecosystems have always evolved over time and continue to do so. And suggesting that only new arrivals in natural habitats that are unassisted by man can be classified as “native” ignores the obvious fact that nowhere on the planet is unaffected by man’s influence, so nowhere is genuinely “natural” anyway.

So. What a refreshing book and one that’s full of stimulation and reminders to look at the evidence and not listen to the hearsay. This book effectively skewers the prejudices and pseudoscience of the plant police extremists for whom natives are, by definition, good and non-natives inherently bad. It should be read by anyone with an interest in native and non-native plants, by those working in the field, and also by natural history and garden writers like me - so we don't simply repeat misconceptions in our work. The book is stimulating and refreshing: as soon as I got to the end I immediately started again at the beginning. [The anwser to the book's title, by the way, is a fascinating one. Needless to say, it's not what you think.]

Where Do Camels Belong?: The story and science of invasive species by Ken Thompson is published in Britain by Profile Books. It will be published in North America as Where Do Camels Belong?: Why Invasive Species Aren't All Bad by Greystone Books in September. North American readers who are eager to read it before September can order the British edition from amazon.com.

You're a brave man, Graham, to risk the wrath of the native-only crowd with such a review. Unbiased science doesn't provide the simple, clear-cut "evidence" that unambiguously tells people what's OK and what's not OK to plant. If some non-natives are OK, then that opens the floodgates for the most invasive species, and people have no ability to discern the difference. It's best if the experts paint a picture of ecological disaster from planting non-natives -- that way, no one will be confused as to what is the one right thing to do, for everyone living in every region.

Thank you, Beth. You may remember that I stirred up the nothing-but-natives people with another book review a few years back (http://transatlanticplantsman.typepad.com/transatlantic_plantsman/2011/04/alien-plants-are-better-for-insects-than-natives-its-official/comments/).

But it's really Ken Thompson who risks the wrath of the anti-alien people by writing the book in the first place! I urge you to read it and tell me what you think. I'm a great believer in science and, intuition guided by science, but the whole issue is drowning in hearsay and opinion presented as fact.

Thank you, Graham for another illuminating post. It was your short article from years ago (that I found on Google) - Don't Tell Me Not to Plant Buddleja, that gave me courage to get right back in the face of the native plant purists.

Of course native plants are great and critical for providing foliar food for lep larvae, and by extension, food for little songbirds and the rest of the food web. But it was, in particular, their bashing of Buddleja - (especially the new sterile seedless cultivars) and the ceaseless guilting/humiliating gardeners until they ripped them out of their gardens that alerted me that the purists are doing as much damage as they are good - if not more so.

Their greatest error, imho, is self-promotion that THEY can fix the world with their plan. I'm guessing they need the other few million of us combination gardeners to save said world…

Even their guru Dr Doug Tallamy does not promote 100% native plantings and says in his audio interview with his Timber Press publisher that the biggest bang for the biodiversity buck is through the planting of native trees; that adding colorful ornamentals flowers and shrubs are fine. But that sane message gets lost in the blog entries of the fervent native purists. One nursery did a meme showing Buddleja being as useless to pollinators as a yard of cement. What kind of talk is that? Crazy talk. - Ina.

Looking forward to reading this based on your review.

Thank you, Ina, for your thoughtful remarks. A garden is, after all, a garden - not a restoration or re-creation of a wild habitat - so those who insist that we do not plant garden plants in our gardens are completely missing the point.

More effective would be to campaign to reduce the number of deer in our forests to pre-colonial levels - a dramatic reduction in deer numbers would make a huge contribution towards protecting our native flora and reduce the impact of invasive plants that move in once the natives are eaten.

And here's a link to my blog post entitled "Don't tell me not to grow buddleja" from back in 2008 http://transatlanticplantsman.typepad.com/transatlantic_plantsman/2008/06/dont-tell-me-not-to-grow-buddleja.html

This is crazy. Just one look at a swamp covered in acres of purple loosestrife it's obvious that it's pushed out all the natives. Open your eyes and take a look around you, invasives are everywhere and native plants are vanishing.

Not so fast... It turns out that purple loosestrife is not such a menace after all. More in a post here soon.