About Graham Archives Subscribe to this blog Get new posts by email
Baby blue (and purple and black and white) eyes
Transatlantic plant trials - any value? 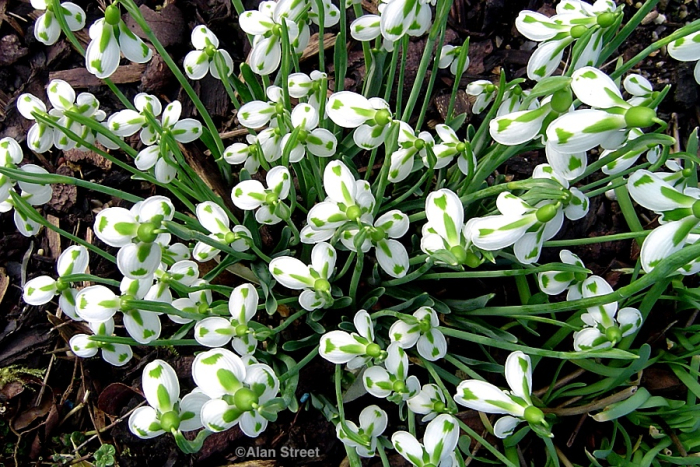 I’ll tell you more about it in a moment but what about this whistling? Well, in the latest issue, there’s a short review of a German book called Schneeglockchen-ABC (The ABC of Snowdrops) by snowdrop wizard Matt Bishop. Here’s what he says:
“There is really only one way to describe Schneeglockchen-ABC: as very curious indeed... The text seems to be formed from a conscious and strange juxtaposition of fact and the wildly fictitious, with no attempt to differentiate them.… This is highlighted very early on, under the entry for a supposed cultivar ‘Alert’ which, translated, claims to be “described by Matt Bishop as the first snowdrop to produce loud whistling tones.”

He goes on to say, with remarkable restraint, it seems to me: “Much of the information… would have benefited from checking at source. The resulting text is marred by so many errors of information and spelling that it cannot be relied upon for accuracy.”

But let’s set that aside and point out the international value of this splendid annual. There’s a really useful summary of the rules governing taking plants to and from the UK, USA, EU and elsewhere; a fascinating piece on the wild daffodils of Morocco together with an overview of fifty years of daffodil breeding by Brian Duncan. Alan Street outlines how to start a snowdrop collection, there are reports from two tulip festivals in Yorkshire as well as from shows in Australia, New Zealand, various parts of Britain as well as the World Daffodil Convention held in St. Louis, Missouri.

There’s science, taxonomy, practicalities, conservation, awards and other info for both the serious expert and the enthusiastic newcomer. And the photography is excellent. And then there’s the whistling snowdrop. A splendid winter read.

* Unfortunately I’m able to provide you with a photograph of the legendary whistling snowdrop. So please enjoy Alan Street’s startling image of the variety ‘South Hayes’.

In the UK you can order the 2016 RHS Daffodil, Snowdrop and Tulip Year Book from the Royal Horticultural Society book store. They will also send copies anywhere in the world.

In North America you order the 2016 RHS Daffodil, Snowdrop and Tulip Year Book from the American Daffodil Society.