About Graham Archives Subscribe to this blog Get new posts by email
The whistling snowdrop!
Seeds and plants by mail order: It’s not too late! 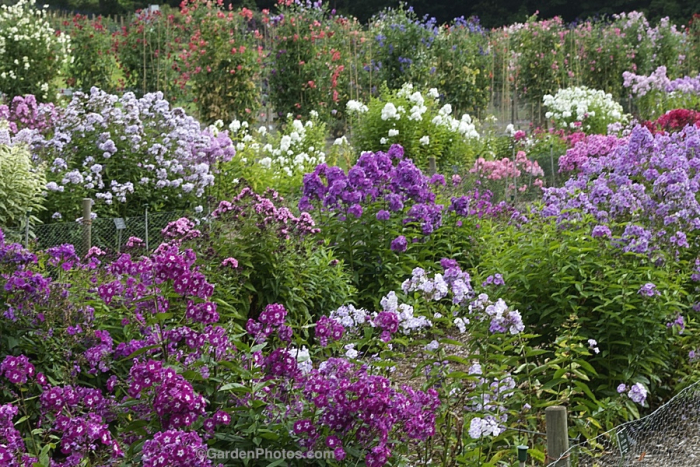 On both sides of the Atlantic, independent trials of perennials are organized by a number of different organizations. But I’ve sometimes seen the Royal Horticultural Society’s Award of Garden Merit (AGM), often given after trial (phlox and sweet pea trial, above), used in American catalogs and wondered how much relevance this British award has in North America. And does the Plant Evaluation Program run by the Chicago Botanic Garden and, in Delaware, the trials run by the Mount Cuba Center (baptisia trial, below) have any relevance in Britain?

Well, this year I’m chairing a group of experts working to update the list of AGM heucheras for the Royal Horticultural Society (RHS) and I’ve sent all the participants copies of the reports of the heuchera trials at both Mt. Cuba and the Chicago BG.

Of course, the climate in Delaware and in Illinois is, well, rather different from the climate in Britain but, for hardy perennials, if they grow in Delaware or Illinois, they’ll generally grow in Britain. And while modern American heuchera breeding is often focused on suitability for specific climates, the way the plants look when they’re growing well is relatively constant; a harmonious combination of flowers and foliage works well in any climate. So these reports will provide valuable background to our deliberations.

At first I was skeptical, but now I can understand why the AGM appears in American catalogs – it’s one of a number of useful factors that inform choice. The problem is that some gardeners in Texas or Maine, while they may see that the plants look wonderful, may not appreciate that the plants are given their award in a climate that’s closer to that of Oregon or Washington state may not do well for them. In fact they may die their first year.

But it’s not just climate, there’s another thing going on. I suspect that most British gardeners, seeing trial results from Delaware or Illinois, will just assume that they’re of no relevance, or even interest, and ignore them. True, disease resistance in American trials is unlikely to be of value elsewhere as different forms of the same disease are found in different places. But if the flowers are a dingy color in Chicago they’ll be dingy in Britain, too

American gardeners, on the other hand, seem to have a more open attitude and although they may not want to read the detailed reports of the RHS trials in which plants were given the AGM, they’re happy to accept that this is useful information and allow the awards to inform their plant choices as they decide what’s right for their own gardens.

And perhaps, as the dissemination of information about plants becomes more global, these reports help writers and advisors and consultants develop a deeper understanding of the plants so that the guidance we pass on is more informed. And they help nurseries decide what to grow. These trials and their reports are certainly invaluable to me. Even something as simple as paying attention to the factors these reports consider important is useful.

* The Mount Cuba Center is based near Wilmington, Delaware, just over an hour north of Washington DC, and its primary aim is to foster enthusiasm for native plants and their conservation. You can download their trials reports here.

* The Chicago Botanic Garden has been organizing trials of hardy perennials, and other plants, since 1985 under the expert guiding hand of Richard G. Hawke. You can download their trials reports here.

* The Royal Horticultural Society has been running trials of everything from hamamelis to cabbages to marigolds since, it seems, time began. You can search their database of trials here.

It is strange because American gardeners distrust books published in the US that are originally published by English publishers but respect this award from England. But no one ever said that gardeners are consistent.

I read a number of British gardening magazines and blogs, and I do pay attention to plant recommendations mentioned in those. I do, of course, check the hardiness zones and other environmental requirements before growing anything here in Iowa. But a lovely flower, particularly an annual flower, is worth looking into. Many things that look beautiful in English gardens can actually be grown here (although shrubs are not often among those).

Thanks for the links, and for the interesting speculations and story.

You're right, Beth, annuals are often the most dependable as plants to grow in a wide variety of different climates (and continents). Summer is always summer. And hardy annuals, grown from seed, that thrive in Britain and in Iowa and in relatively cool parts of the US will grow well in many southern states when sown in fall to flower in spring.