About Graham Archives Subscribe to this blog Get new posts by email
Seeds and plants by mail order: It’s not too late!
Roadside orchids Almost two hundred years ago Alexander Campbell, curator of the Manchester Botanical and Horticultural Society’s Garden, crossed a foxglove and a gloxinia (Digitalis grandiflora and Sinningia speciosa) to create what was known as Campbell’s hybrid foxglove.

It looks a little like a rusty D. grandiflora (below, right) but pollen from another foxglove - D. obscura, perhaps? - must have achieved the fertilisation that pollen from a gloxinia could never manage.

The first genuine foxglove hybrid between, D. purpurea and D. grandiflora, was made in 1849 but the seedlings were all sterile and it was not until 1924 that two hybrids that are still grown today were created at England’s John Innes Horticultural Institution: D. × mertonensis and D. ‘John Innes Tetra’. 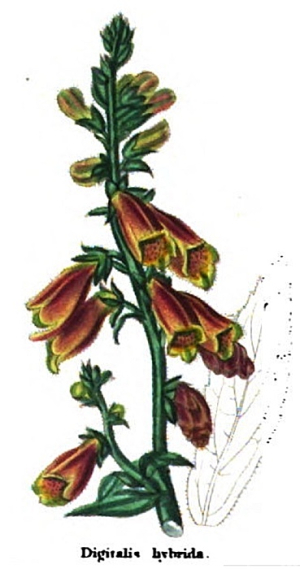 Since then a large number of hybrids between different foxglove species have been created although, sadly, many have been lost including an interesting range created by the short lived Europa Nursery (anyone know where the owners, Tim Branney and Adam Draper, are now?).

Now, digitalis breeding is enjoying a bright revival with new hybrids being developed on both sides of the Atlantic. Goldcrest (‘Waldigone’) (above, left) was one of the first recent hybrids to make its mark. Three different breeding programmes in The Netherlands, in Suffolk (UK), and in Michigan, bring together the familiar British Native foxglove, D. purpurea, and D. canariensis from the Canary Islands. Foxlight Ruby Glow (‘Takforugl’) (above, right) is one of them. And, please, both parent plants are Digitalis. Let's not mess around with creating an imaginary new genus – Digiplexus.

Two new series of prolific dwarf hybrids are also just coming on to the market, the very short Knee High Series (‘Knee High Lavender’ above centre) from England and ‘Lucas’ and ‘Martina’ from The Netherlands.

I’ve recently published a long piece about the history of foxglove hybrids, from that early attempt using pollen from a gloxinia to the very latest developments. It appears in the current (March) issue of The Royal Horticultural Society magazine The Plantsman.

I live in the mid-Atlantic (7a), where we have warm and humid summers. What strain of foxglove would you recommend for gardens here?