About Graham Archives Subscribe to this blog Get new posts by email
Happy 30th Anniversary to the RHS Plant Finder!
Chocolate cosmos alive and well in Mexico, not extinct!

A surprising field of red 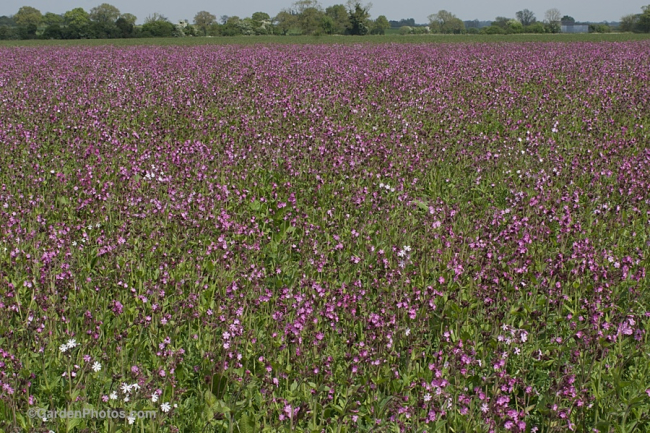 Regular readers will remember that every so often I report on an unexpected crop that I’ve noticed growing in a field as I’ve driven around one or the other of my countries.

The latest, spotted by friends near the historic local English village of Fotheringhay – where Mary Queen of Scots was imprisoned by Elizabeth I – turned out to be a field of, mostly, red campion (Silene dioica).

The acres of vivid magenta pink flowers are impressive but even a glance reveals that it’s not that simple. Red campion is a common British wildflower found on roadsides and in woodland glades and along hedgerows generally in places that are not too dry and not too acid. It’s lovely, and there a few named forms – mainly with variegated or coloured foliage, double flowers or dwarf habit.

In the field at Fotheringhay there were plants with pale and with dark flowers, with red calyces and with green, and with wide overlapping petals making a very colourful flower and with slender petals with spaces between creating a starry look. There were also plants with white flowers and plants with pale pink flowers.

The plants with white flowers are, or are derived from the widespread close relative white campion, Silene latifolia; those with pale pink flowers are the result of hybridising between the two to create a hybrid known as Silene × hampeana.

So, this Fotheringhay field features acres of noticeably variable red campion with a few plants of white campion (which were a little taller and a little later flowering than the rest of the plants) and some hybrids mixed in. But what was it all for?

But what a lovely sight this field is… Another reason to visit the historic village of Fotheringhay and stop for a meal or a beer at The Falcon Inn.

I was more than happy to find this web site. I need to thank you for your moment due to this unbelievable read!! I definitely savored every bit of it and I have you book-marked to see new things in your web site.

Beautiful. I love the color. I want to have those in my backyard too.