Chocolate cosmos alive and well in Mexico, not extinct! 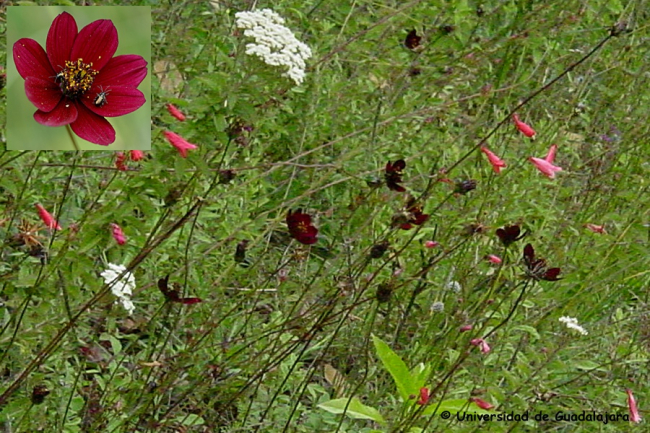 Since the chocolate cosmos, Cosmos atrosanguineus, began to be widely grown in the 1980s we’ve all assumed two things: that it was extinct the wild and that there was only one clone grown which never set any seed. Well, that’s what the Royal Botanic Gardens at Kew and others told us. They even participated in a plan to reintroduce it to the wild. It was all part of the mystique attached to this captivating chocolate-coloured and chocolate-scented plant.

Mexican botanist Dr Aarón Rodríguez and his team found eleven relatively recent records of C. atrosanguineus, the earliest of which was from 1986, and the locations mentioned in the records led them out to find the plant in the wild. Dr Rodríguez told me: “The populations are quite numerous. Plants grow in mixed pine and oak forest.” They were found in three different Mexican counties.

From around the same time Dr Russell Poulter, a geneticist in New Zealand, has been raising plants from seed and working to ensure that the plants resembled the original wild form.

Dr Poulter’s work is the origin of the seed raised varieties now available, ‘Black Magic’ from Jelitto Perennial Seeds, and an unnamed form from Plant World Seeds. At least one more is on the way. His plants have also led to the introduction of new cuttings raised varieties including Dark Secret (‘3013/01’), Eclipse ('Hamcoec') and Spellbound (‘Hamcosp’).

It’s a little baffling that these two fundamental facts have slipped us by all these years. But it’s great news that this lovely plant remains established in the wild and that new introductions are being developed from seed-raised plants.

* Find out more in the June issue of the Royal Horticultural Society magazine The Plantsman, where I describe the horticultural history of the chocolate cosmos from its introduction to Britain in 1861 to the confirmation of its status in the wild and recent development of new cultivars, including those raised from seed. Please subscribe here.
.

Chocolate cosmos in Mexico? Wow.. Will surely try to have it on my garden (https://www.gardenloka.com/) as well.

What I love about chocolate cosmo is that unlike other real chocolate, it is absolutely nonfattening!

I was baffled by the Wikipedia entry saying it was extinct in wild and plants in cultivation were a single sterile clone (because I was aware of 'Chochamocha'). A bit of Googling led to a PDF of your great article in The Plantsman - thanks!

Thank you Jeremy... You've reminded me to go in and edit the Wikipedia entry. When I have a moment...