About Graham Archives Subscribe to this blog Get new posts by email
Testing new varieties in my trial garden
Ivy: Friend or Foe? 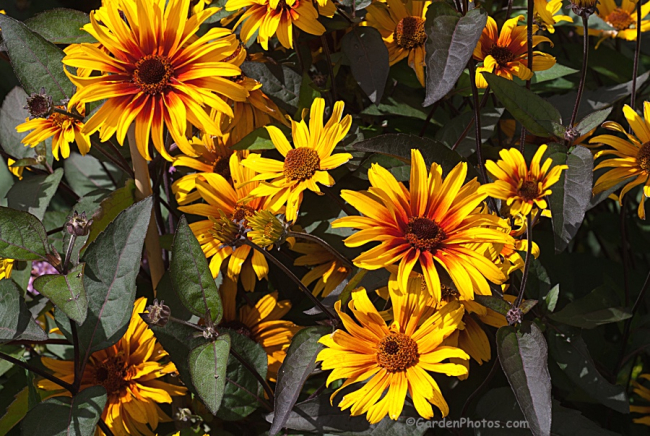 The outstanding new perennial I grew this year was in the garden only by chance. Heliopsis ‘Burning Hearts’ was a trade from Ian Hodgson, Editor-at-Large for the UK weekly magazine Garden News, and it’s been exceptional. I passed him some new heucheras, he gave me the heliopsis.

This hardy bronze-leaved perennial is a form of the North American native H. helianthoides var. scabra which grows in much of the east and south of the USA as well as in Canada. A number of things impressed me about ‘Burning Hearts’.

I planted three young plants, raised from seed Ian had sown earlier in the spring, in mid May. The purple-bronze foliage was impressive straight away, the plants grew away well and in June they were in flower. They’re still flowering today at about 90cm/3ft, in spite of being partially shaded by the unexpected vigour of a new physocarpus (not to mention some rampageous climbing beans).

The bright, slightly golden yellow petals are rolled back gently from the dark eye, each one stained red-orange at the base, and are perfectly shown off by those dark leaves although the red centres fades as the individual flowers age. The plants have been dead-headed regularly and a long succession of stems have been cut for fiery bouquets. They’ve been amazingly productive.

Jelitto Perennial Seeds, who developed ‘Burning Hearts’, point out this is like a supercharged version of ‘Summer Nights’ with darker leaves and flowers in more dramatically contrasting colours. They say it’s been in the works in Germany since 2004 when, the catalogue from Jelitto reveals, “the idea for ‘Burning Hearts’ came in a dream”. Hmmm…