About Graham Archives Subscribe to this blog Get new posts by email
Ivy: Friend or Foe?
Roadside apples 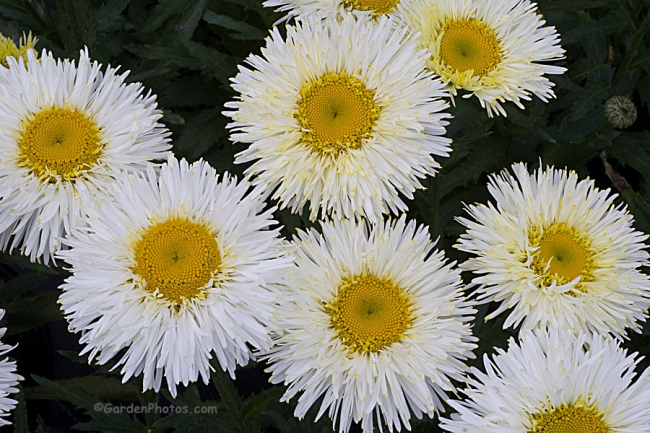 Shasta daisies have come a long way in recent years, with developments on both sides of the Atlantic, and this year I’ve been looking at some of the recent introductions in my new trial garden.

The great American plant breeder Luther Burbank is said to have created the Shasta daisy using some creative, though now discredited, hybridisations between leucanthemums and related genera. He made pollinations between various species and genera but it seems certain that the resulting seedlings were not actually hybrids: pollination but no fertilisation.

The first double-flowered variety was spotted from a train passing through Norfolk in eastern England, growing wild, by Horace Read. On his return journey he’s said to have pulled the emergency cord, jumped out, dug up the plant and quickly got back on the train. That was in the 1920s.

These days, one of the leading breeders is North American, Terra Nova Nurseries, the other British, RealFlor, with other breeders in North America, Britain and Holland also making improvements.

This year I grew almost all the recent Shasta daisy introductions. I can’t make definitive judgements in their first season, the plants went in at different times and varied in size enormously, but a few things are clear.

The range of flower forms is impressive with neat doubles and tightly anemone-centred forms and, while we still have no pink-flowered forms, the yellow-flowered varieties are becoming increasingly impressive.

As I write in early October, most still feature a few flowers except for 'Shapcott Gossamer' and 'Shapcott Ruffles' which have been over for many weeks, in spite of regular deadheading.

Both ‘Real Galaxy’ (above, in summer) and ‘Goldfinch’ are still opening new buds, as is ‘Victoria’s Secret’ but its stems are so thin that they’re collapsing under the weight of the flowers. ‘Lacrosse’ had a break but this morning I see that it's producing new buds. ‘Real Charmer’ has no buds coming but the open flowers still look good.

Next season will be a much better test as all will be starting from established plants. I’m looking forward to it, and all thanks to Luther Burbank and Horace Read.