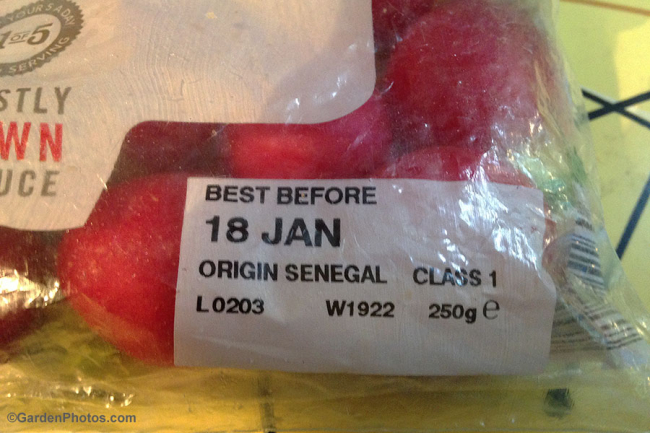 There’s been snow on the ground both in Northamptonshire and in Pennsylvania this last week or two so not much chance of growing them in January wherever I happen to be. But I didn’t expect them to come the best part of 4,000 miles.

It’s not possible to grow them in Pennsylvania at this time of year unless you have a heated greenhouse and the energy that would go into heating it is probably more than is used to fly that packet of radishes from west Africa.

It’s certainly possible to grow them in winter in a cold greenhouse here in Northamptonshire, but I’ve recently lost the use of 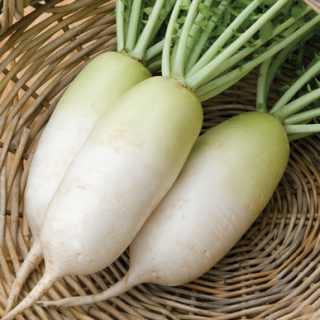 my greenhouse so no go there.

And, to be honest, I didn’t have much luck growing them outside last year either. What, I couldn’t grow a few radishes in my fancy new trial garden? Well, actually, I grew quite a few but far fewer than I’d intended because they were attacked by a nasty little pest: flea beetle. It attacked the rocket and the turnips too.

The varieties I grew were ‘French Breakfast 3’ and mildew-resistant ‘Celesta’ – of course, mildew-resistance is not much use if the flea beetle gets them. Anyway, this year I’m going to try two variations.

Firstly, I’m going to grow them under low fleece tunnels to keep the flea beetle off. And secondly, the red-and-white ‘French Breakfast 3’ had a good tangy taste so I’ll use up the remaining seed of that and I’m also going to try ‘Celesta’ again ‘Giro’ was too mild so I’m going to try ‘Solito’ instead. It has a high resistance to cracking, which was another problem in my troubled year of radishes.

What would I grow in north east Pennsylvania? I’ll be trying the recent All-America Selection ‘Roxanne’ which is proven across a variety of climates and takes the summer heat well. And everyone in our area recommends Daikon radishes, of one sort or another, so I’ll be giving them a try. The 15cm, pure white ‘Alpine’ (above, US) and 'Mino Early' (UK) looks especially appealing.

And, until the new crop comes in, I’ll be checking the radishes in the supermarket. Morocco is the nearest source I’ve spotted so far. Sigh… So grow your own as soon as the weather allows.

Look for a good selection of radish seeds at Johnny's Selected Seeds (US - 24 varieties) and at Mr Fothergill's (UK - 21 varieties).

And, in the winter, perhaps we should just not bother eating them... From Senegal! 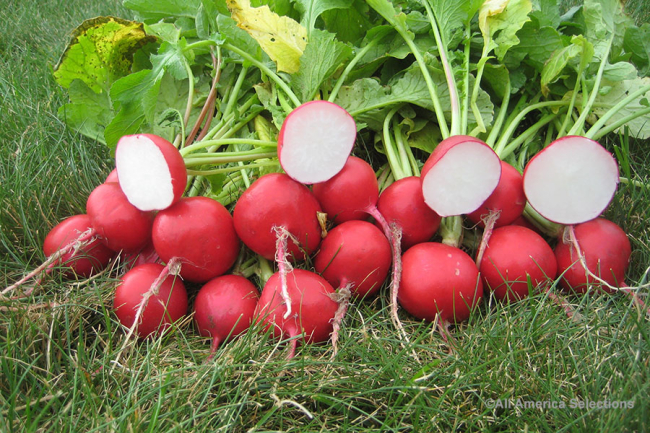