About Graham Archives Get new posts by email My blog is re-launched!
Previous month:
May 2021
Next month:
July 2021

Lavatera is lost - but not Coleus 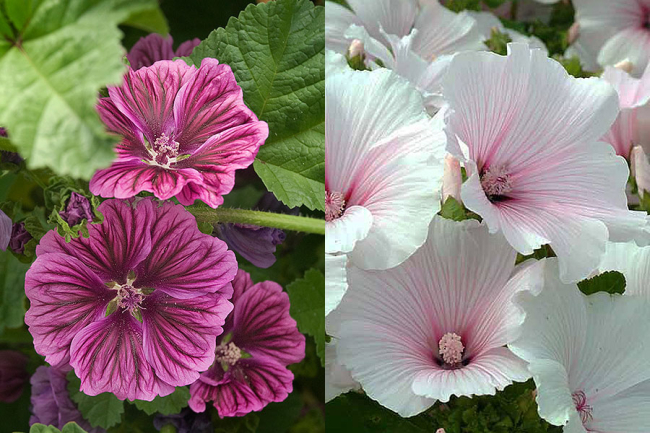 Malva (left) and Lavatera - both are now Malva.

The latest issue of the RHS magazine The Plant Review arrived recently – always a treat – and tucked away in what they call Classification Corner is the news that the genus Lavatera no longer exists – it’s been amalgamated into Malva.

Now most of us, taking a look at a Lavatera (above right) and at a Malva (above left), would wonder why they were separated in the first place. Needless to say, it’s all down to our old friend Carl Linnaeus, way back in 1753, and what Royal Horticultural Society botanist Dawn Edwards refers to as “differences in epicalyx segment fusion”.

Yes, but what on earth is the epicalyx? Well, the green calyx encloses the petals in bud, and the epicalyx refers to the little green bits that are outside the base of the calyx. Linnaeus thought that whether or not these little bits were fused together at the base (in Lavatera) or not fused at the base (as in Malva) was important.

It wasn’t long before botanists decided that Linnaeus had probably got it wrong but no one did anything about it until relatively recently. Back in 1998 molecular studies revealed that this division did not reflect the true relationship between the species grouped under Lavatera and those grouped under Malva. So, after careful deliberation – and they always deliberate long and hard these days, the RHS and botanists around the word agree - they’re all Malva.

I have to say: I can’t really disagree. And as they’re less separate than we thought, perhaps someone should try crossing them together…. Could be interesting.

• I should mention that it’s also been decided that Coleus are, indeed, Coleus. Not Solenostemon. Or Plectranthus. Which is good news all round. 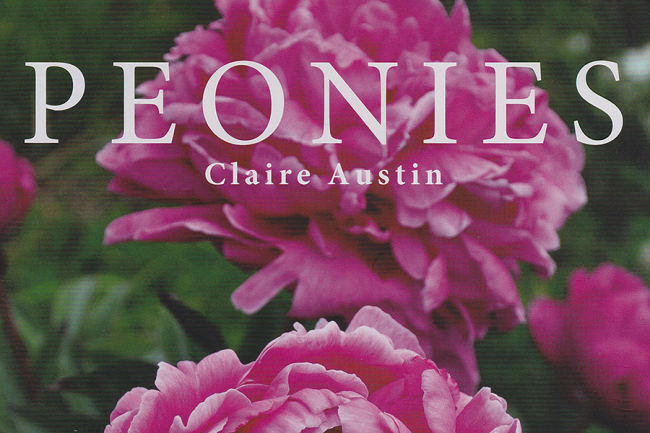 Peonies is the new book by Claire Austin

It’s peony season and we have a new book on peonies to savour. Written and photographed by renowned peony expert Claire Austin - her nursery lists more peony varieties than I could count – she doesn’t just describe her choice from the thousands of varieties she’s seen and grown over the years. No, she adds the fruits of her insight derived from decades of experience. (Well – enough decades to soak up the experience but not so many decades that… I’ll stop digging.)

The book is, basically, Claire’s choice of peonies, described and illustrated. We know we can trust her choice, and there’s no tricky botanical language in the text to trip us up. In fact I think that she sat on a stool in front of each variety and simply described what she saw. The best way.

But there’s more. So, apart from giving us the description of each plant we learn, for example:
‘Bunker Hill’ “Unlike many red lactiflora blooms, the petals don’t deteriorate quickly when the flower is cut.”
‘Emma Klehm’ “A useful plant for those who want a very late-flowering variety.”
‘Little Medicine Man” has flowers that are small “but produced in great numbers on stiff red stems”.
‘Marie Lemoine’ “Sadly, wet weather can spoil the flowers.”
‘Shirley Temple’ “blooms freely in a partly shaded spot”.’

She also notes, for each variety, whether or not it needs staking and the strength of its scent and lists more than two dozen varieties that she especially recommends for cutting.

Before we come to the descriptions and illustrations that make up most of the book, we have Claire’s advice on growing peonies, a summary of their development over the centuries, and a fascinating account of her own history with these everlastingly tempting perennials.

And I’m pleased to say that she slays the myth about moving peonies: “There is a long-held but totally unfounded gardening belief that peonies cannot be moved.” Got that? “unfounded”.

“Peonies have few ailments,” Claire continues. True enough. But a cut flower growing friend asked me just a couple of days ago why her white peonies were spoiling the purity of their colour with faint red flashes. I had no idea, so I hoped Claire’s book would help. But no luck.

So I’m very happy to have this book on my shelf, to enlighten me – and to steal from – whenever I need. Just one thing: the design is, well, a little bit dull. Modern plant books, including the excellent RHS Horticultural Monograph series and Discovering Dahlias that I reviewed here recently, inspire interest partly because of the elegance of their design. I see no designer is credited on this book. Claire should think about hiring a specialist designer next time.

Peonies by Claire Austin is published by White Hopton Publications at £25. Order a copy from Claire Austin’s Hardy Plants. 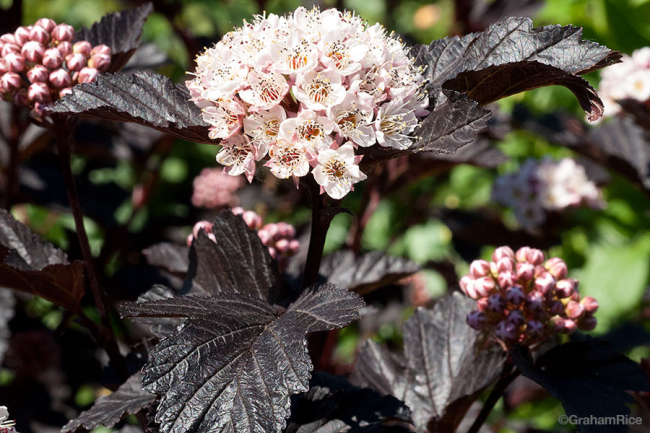 I’m a big fan of Physocarpus, ninebark as they’re known in North America from the way the bark repeatedly rolls back off the maturing stems. Though why it isn’t eightbark or tenbark I really don’t know.

These are hardy as rocks, deciduous shrubs grown for their colourful foliage, their clusters of white flowers, their autumn leaf colour and, to a lesser extent, their berries.

The first to come to our attention in modern times were ‘Diablo’, with dark purple leaves, and ‘Dart’s Gold’, with bright yellow foliage – both useful shrubs. But it was when these two were crossed together to create what is known as Coppertina in North America and Diablo D’Or in Europe (its raiser’s name is ‘Mindia’) that I really started to take notice.

I was sent trial plants of this by Proven Winners, the American plant marketing company, now expanding into Europe, and year after year it was a star in my Pennsylvania garden for its foliage that opens in amber yellow and matures through orange to purple-bronze.

More recently I planted some that I didn’t know so well on my trial garden in Northamptonshire - thanks to John and Maria Jones of Hyfryd Plants in Wales for help with sourcing plants - and it’s time for a report.

But before that, I just want to mention physocarpus for cutting. America’s Association of Specialty Cut Flower Growers has twice voted a physocarpus as its Cut Flower of the Year. And although it can be good to cut branches lined with flower clusters, Firebrand (below) looks ideal for that use, of those I’ve tried Midnight (top) is the best and holds its leaves well as they turn.

I find fruiting unpredictable and tough to assess because those that carry the most flowers are the ones whose flowering sprays are cut for the house. The quality of autumn leaf colour, too, seems unpredictable.

New physocarpus varieties are still being released. Two dozen are listed in the current RHS Plant Finder and we’re awaiting the results of the trial of thirty varieties at the RHS Garden at Wisley that ended in 2019. In the meantime, here are my thoughts on my own mini-trial.

All Red (‘Minalco’)
I was especially looking forward to seeing All Red mature as it was touted as being smaller, more bushy, more compact and with red-bronze foliage that was noticeably smaller than that of other varieties. That’s all true - except that after a couple of years it started to produce a succession tall, very vigorous, large-leafed shoots , with internodes more than twice as long as on All Red itself. They emerged low on the plant and would have taken over completely had I not cut them out. This one is going on the compost. Now rarely seen, rightly. Bred by Pépinières Minier in France.

Firebrand (‘Hyfbrand’)
The foliage is coppery orange in the shoot tips, maturing to dusky purple bronze with green undersides. The flower clusters, spread across 30-40cm of stem, are relatively small, but produced on short stems at every node creating a very attractive look. Pink buds open to pink-tinted white flowers, it retains more pink colouring in its flowers than others I’m growing. Bred by John and Maria Jones of Hyfryd Plants in Wales.

Lady in Red (‘Tuilad’)
Reddish copper young shoots mature to dusky greenish purple foliage, the small clusters of pink buds fade to white as the flowers open. This is similar to Coppertina, which is said to be mildew resistant although I’ve not had powdery mildew on any of mine. This can stay in its up-against-the-east-facing-fence site until I’m desperate for space, but if I were planting now I think I’d pick Coppertina. From Jonathan Tuite of Westacre Gardens in Norfolk.

Midnight (‘Jonight’) (above)
If you’re looking for the darkest foliage colour, this is the one. The leaves open in deep purple-bronze foliage with a noticeable gloss, maturing to dull bronze - almost black- and greenish bronze on the back. The vigorous growth is ideal for cutting and lasts exceptionally well. Not selected for its flowers, so the show is sparse but the rosy pink buds open to white flowers. Another from John and Maria .

Summer Moon (‘Tuimon’) (below)
More spreading in growth than my other varieties, the chartreuse-bronze new growth matures to green with pale veins and hints of bronze creating on overall blend of green and bronze tints. The flower clusters are larger than those on any of the others, and on longer stems, with the pink buds opening to white and with noticeably red anthers. Makes an effective flowering shrub, wider than high. Another from Jonathan Tuite. 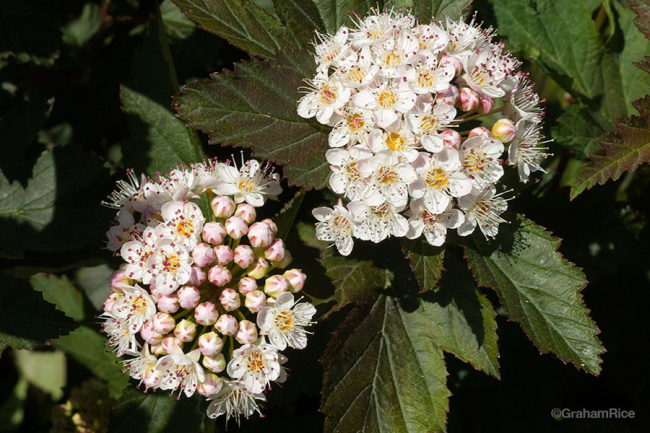