Our movie hits the streets (and screens) 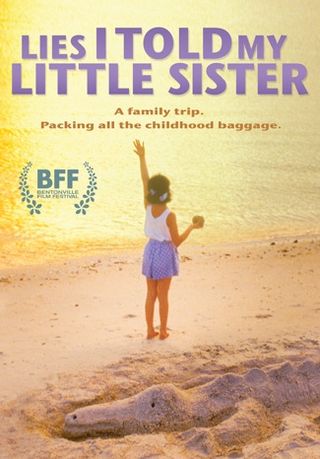 Lies I Told My Little Sister, the feature film written by my wife judywhite and nephew Jonathan Weisbrod, has recently been released in the USA. Hooray!! It stars Lucy Walters, currently making waves in the hit TV drama series Power, and rocker turned actress Ellen Foley, Meat Loaf’s duet partner from the Bat Out of Hell album. It also features US soap star Alicia Minshew of All My Children and Donovan Patton of the pioneering children’s US TV series Blues Clues. Oh, and me…! Not starring, exactly, but still…

Telling the story of a globe trotting photographer and the little sister she used to persecute with outrageous lies, as the whole family adjusts to the death of the oldest third sister they all head off on a family vacation – packing, as it says on the DVD cover, all the childhood baggage.

The resulting fun, fury and frustration, fuelled by vodka and love, makes a tender and warm-hearted movie revealing the elastic boundaries, and the unbreakable connections, of family love. Shot on Cape Cod, in New Jersey and at The Phoenix Store just a few miles from our front door in Pennsylvania, the film won awards at more than twenty festivals across the country last year with all the main players and the film itself being nominated or winning awards.

Horticulture? Well, apart from some lovely blue hydrangeas… not much. Although your humble blogger has a small part playing Ellen Foley’s love interest – and who could ask for more in their first movie part?!

This is a really enjoyable drama/comedy about a family full of engaging characters and how they react to their past and to the death of the oldest sister. It’s funny as well as poignant. The director and crew are almost all recent graduates of New York University film school as they embark on their careers after making some award-winning short films while at college.

It was fascinating to participate, even in a small way, and I came away full of admiration for the craft of acting; seeing these fine actors at work made me realize how good they are.

You can watch the trailer below, or watch the first two minutes of the movie here (just click the tab).

Chosen by Geena Davis as a special selection for Walmart, Lies I Told My Little Sister is available for streaming now at Walmart, amazon, iTunes, VUDU, Google Play and other services. DVDs are available in about 3000 Walmart stores. Negotiations continue about a European release.

Next time, back to plants... 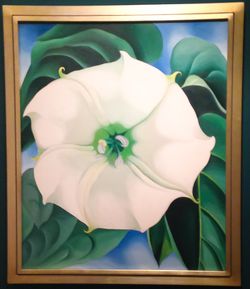 I was in Bentonville, Arkansas recently, my first time in that state, and the first time in the town where Walmart got its start. It today dominates the landscape, culture and mindset. The drama-comedy film I wrote, "Lies I Told My Little Sister," had been chosen an Official Selection of Geena Davis' inaugural film festival, Bentonville Film Festival (BFF)  and I was invited for the events.

What I did not expect – until I read up on Bentonville before going – was that a world-class museum opened there on 11/11/11. Crystal Bridges Museum of American Art was made possible by Alice Walton, daughter of Walmart founder Sam, and it is truly a spectacular building surrounded by spectacular grounds, all free to the public. I was there for the opening party and a lot of BFF panels on women & diversity (the festival's theme), and saw Robert De Niro and Rosie O'Donnell and of course Geena, among other A-list celebs, but managed to miss the museum art itself until I went back later specifically.

I went to see a big flower. In a painting that has always been one of my favorites. The amazing, huge work of iconic art called "Jimson Weed, White Flower No. 1" is a 48in x 40in oil on canvas painted in 1932 by my favorite artist, Georgia O'Keeffe. It was purchased by the museum last November, possibly to help put it on the map, because it brought the highest price ever paid for a work of art by a female artist - $44.4 million at Sotheby's for a Datura stramonium.

Deservedly, the Jimson Weed has its own room, on a huge green wall emblazoned with a quote: “I said to myself, I’ll paint what I see, what the flower is to me but I’ll paint it big and they will be surprised into taking time to look at it.” –Georgia O’Keeffe “About Myself,” 1939

Walmart's Bentonville is a surreal setting for a high-class film festival, and a surprising setting for the Jimson Weed. The museum's other acquisitions make for a simple curation arranged by year, usually with only one example of each American artist's work. There are actually three other pieces by O'Keeffe here, all minor, dwarfed literally and figuratively by the white flower on the wall opposite them. And during a film festival dedicated to championing women, despite the presence of such stars as De Niro and Courtney Cox and Nick Cannon and Bruce Dern, it was only the great Georgia O'Keeffe, now the most sought-after female artist in the world, who truly took my breath away. 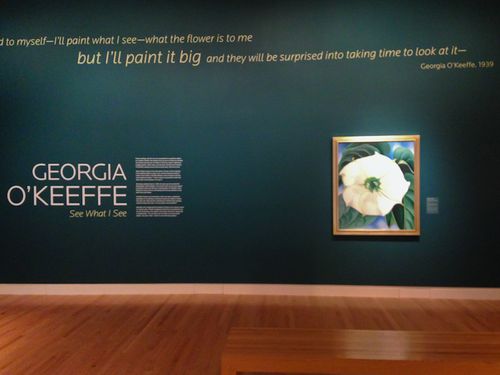 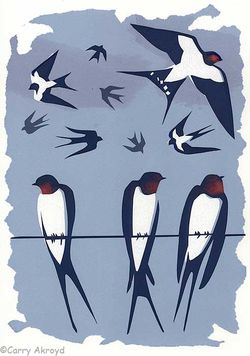 Birds and plants seem to go together naturally. Birders usually seem to be interested in plants, while gardeners enjoy birds. In the US, there’s even a very popular magazine, Birds & Blooms, that combines the two enthusiasms. But not all bird books appeal to gardeners – they may be too focused or too esoteric – but this one is different.

Tweet Of The Day began as a BBC radio series, a one hundred second daily focus on an individual British bird starting each time with its song (the closest North American equivalent is the two minute BirdNote). The popularity of the series has led to this enticing book in which the bird song of the radio series is replaced by bold and captivating illustrations (click to enlarge). The result is an enjoyable month-by-month guide to birds by two of Britain’s most acclaimed naturalists and one of Britain’s premier wildlife artists.

All the familiar garden birds are included, along with many that we’ll see on our walks and drives around Britain. But rather than provide a detailed description of each one (there are plenty of illustrated field guides, after all) authors Brett Westwood and Stephen Moss concentrate on the birds’ habits, their song, and their jizz – what it’s like to see them and how they behave – all clearly derived from their own long day-to-day experience with the birds. And there’s a tempting sprinkling of intriguing stories as well: find out which bird stays in the air for eighteen months after it leaves its nest and check out the traditional way of cooking baby gannet!

Their style is relaxed, conversational almost, yet they pack in so much information without being heavy-handed about it.

And everything is enlivened by the full page, full colour illustrations from Carry Akroyd (click to enlarge), as well as dramatic 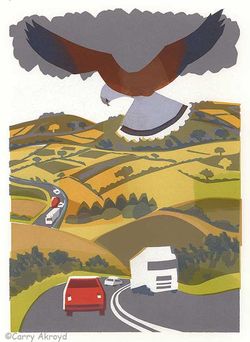 endpapers, chapter openers and a neat one-shot black and white cameo of each bird.  Her colour work very effectively sets the birds in their landscape: the pheasant and brambling under an autumn oak, the kestrel hovering above a rural road, the kingfisher streaking over the stream, the grouse on the moor. She has the knack of making us feel familiar with a bird even if we’ve never actually seen it, and even the small black-and-whites give you a snapshot of how they behave.

While it’s the illustarions that first grab you, this is a great book for people who are interested in birds but don’t know very much while seasoned birders will discover details they never knew. You start by dipping into it – and end up forgetting about lunch.

BBC radio's Tweet Of The Day is available as a podcast.

* American readers may not be familiar with the birds but they will surely find the text fascinating and certainly enjoy the illustrations.

Tweet Of The Day by Brett Westwood & Stephen Moss, illustrated by Carry Akroyd, is published by Saltyard Books. 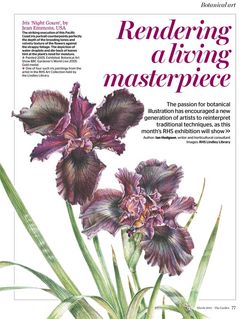 Back in 1994, I was delighted that the American botanical artist Jean Emmons agreed to illustrate my book, Hardy Perennials. I’m sure that her drawings introducing the four seasonal sections of the book (below right, click to enlarge), and also illustrating individual plants, played a big part in the book winning the Garden Book of the Year Award. Many American readers will also know her work from her illustrations for the front cover of the early Heronswood nursery catalogs .

And just this week I was again so pleased to see that her painting of a Pacific Coast Iris, from the Royal Horticultural Society's own collection, is leading off the gorgeous article on botanical painting (left, click to enlarge) in the RHS magazine The Garden. And they’ve put the whole piece online so anyone anywhere can see it.

Written by Ian Hodgson, formerly editor of The Garden and one of the great garden magazine editors of his generation, the piece shows us an impressive range of plant studies chosen from the RHS’s 30,000 strong collection. From tulips painted in 1630 to rhubarb roots from 2011, the range is astonishing. 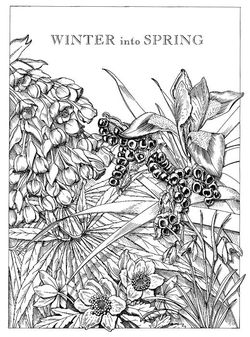 And these superlative paintings really do bring out the character of the plants: the auricula, the hydrangea and even the red cabbage.

Anyway… It’s great to see features like this one from The Garden made available online to everyone. The RHS is a charity and making material like this available to the wider world - and not just to its paid-up members - is part of its raison d’être. Check back at the magazine’s website every month for more.

And be sure to take a look at Jean Emmons’s website where, as well as gallery of her breathtaking work, you can discover just how many awards she’s won! And you can also order my book, Hardy Perennials, with her lovely pen-and-ink illustrations (right, click to enlarge), from amazon.com

in North America and from amazon.co.uk

Sculpture in the garden

So often, still, people think that the only sculpture which works in the garden is statuary, traditional sundials, cherubs… – especially in weathered stone. No.

I’ve just returned from the private view of an exhibition of paintings and prints by Alex Calinescu at fermynwoods gallery in Northamptonshire. The large paintings were especially engaging, a blending of the organic and the abstract reminiscent of the work of Andy Goldsworthy. And in the gallery’s garden is a piece of sculpture by Ros Stoddart, the gallery owner, which is entirely different from traditional garden sculpture. Determinedly modern in materials and design, you look through it to the distinctly contrasting bullrushes at the edge of the garden pond and rural landscape outside the garden with the field of yellow rape in far distance.

The colour, the smooth clean lines, contrasting with the verdant detail in the grass and the yew hedges and the oak behind, makes a striking impression yet the sculpture is an integral part of the place. Give me this over more bloody cherubs any day!