Blue poinsettias: A sin against nature 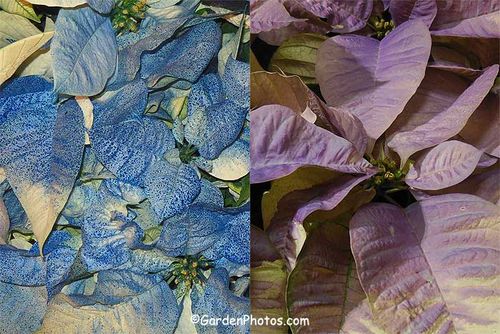 Last night at the local supermarket I spotted these: Blue poinsettias – and lilac poinsettias! I’d heard about them but never quite believed it could be true. I thought the red ones were bad enough. Silly me. The lilac one makes me feel especially ill.

These abominations are coming your way, Brits. Perhaps even with added glitter.

They're the perfect present for someone you’re obliged to buy for – but secretly hate! But guess what: after about a week they will start turning red.

And let’s be clear: any plant dyed blue is a sin against nature. Glad we’ve got that clear. Happy Holidays! 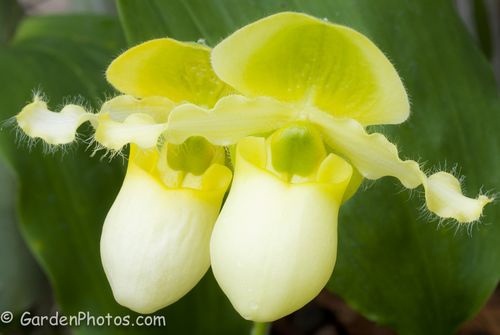 One of my favorite indoor orchids is also one of the easiest to grow. Even in the middle of summer, when most of the gardening attention is outside, and the majority of houseplant orchids are flower-less, gearing themselves up for fall and winter blooming, one very cute plant is still shining away on the windowsill.

Paphiopedilum primulinum (above, click to enlarge) is a tropical ladyslipper orchid species from Sumatra, only discovered as recently as 1972. It’s so named because of the classic primrose yellow color on the pouch and in its wavy petals, often also with green in the top (dorsal) sepal. There’s another version of it that adds pink to the color palette (var. purpurascens), which is equally adorable. (The yellow version is var. flavum, also known as var. album.) Whichever the colors, everyone who sees Paph. primulinum is instantly smitten.

Besides its obvious flower charm, this species keeps blooming sequentially, one bloom at a time, over many months, and, in fact, can be in dainty flower almost constantly over years. Each flower lasts about a month. The only time you will have two flowers at once (as pictured here) is when the oldest one is just about to fall off, which it will do abruptly, generally without shriveling up first. The plant is small and compact (except for the ever-elongating flower spike) with a total leaves span of about 6 inches (15cm) wide. The flowers are about 2.5 inches (6.4cm) long.

Paph. primulinum makes a good parent in hybridizing, and one of its best offspring is the primary hybrid 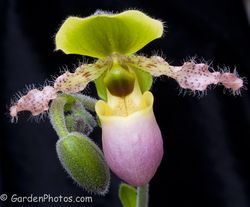 Grow the species and its hybrids on a windowsill that gets any exposure except north – it doesn’t need too much intensity, and it even does fine under four fluorescent light tubes. It likes average room temperatures where night temperatures don’t get much below 60°F (16°C) in winter. Water thoroughly about twice a week, so that it just stays damp, and use a fine orchid mix in a small but deep pot. Weekly orchid fertilizer is appreciated but I find that it blooms well even when you forget for a while. 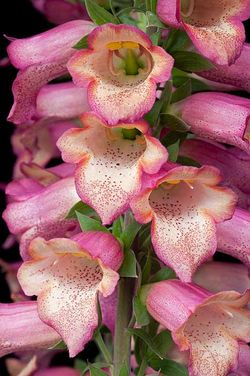 It took a long time to get it off the ground, but in the three years that the Chelsea Flower Show Plant of the Year Award has been running it’s quickly established itself as a highlight of the gardening year.

Only plants which have not been seen at a flower show before are eligible for the award. The RHS Plant Committee draws up a list of twenty finalists from all those entered, then on the afternoon of Press Day at the show each one is presented to the members of the RHS specialist plant committees by the nursery or breeder who’s introducing it. There’s a vote, and the winner is declared. The news quickly runs around the world and success inspires a dramatic boost in sales, even amongst plants that don’t win.

This year’s Plant of The Year is Digitalis Illumination Pink (‘Tmdgfp001’) (above left, click to enlarge) a hybrid between the familiar biennial foxglove, D. purpurea, and a perennial, slightly woody species that until recently was called Isoplexis canariensis . It’s stunning… Created by Thompson & Morgan’s plant breeder Charles Valins, it combines the robustness and hardiness of the British native, with exquisite colouring of the Canary Islands native. And it’s sterile, so flowers for months. It’s available in Britain, and is currently being propagated for release in North America. 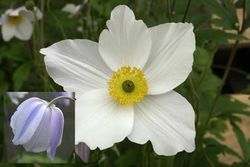 Last year’s winner was a hardy Anemone hybrid, ‘Wild Swan’ (right, click to enlarge), developed from A. rupicola by Elizabeth MacGregor at her nursery in Kirkcudbright, between Dumfries and Stranraer in south west Scotland, where it had been on trial for ten years. ‘Wild Swan’ is available in Britain, and is now being grown by Monrovia for sale in the US. 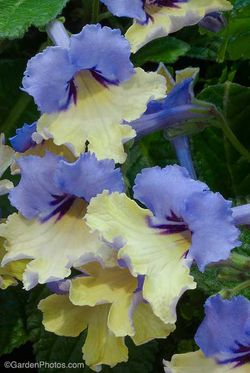 In 2010 the first winner was an impressive Streptocarpus from Dibleys, ‘Harlequin Blue’ (left, click to enlarge) was the first bi-colour streptocarpus with flat-faced flowers that show off the colour well. The yellow on the lower petals makes a bold contrast to the blue upper petals. ‘Harlequin Blue’ flowers prolifically on compact plants. It's available from Dibleys in Europe, no sign of a North American source yet (please correct me if I’m wrong).

So three great plants are the first three Plant of the Year winners. All are well worth growing. 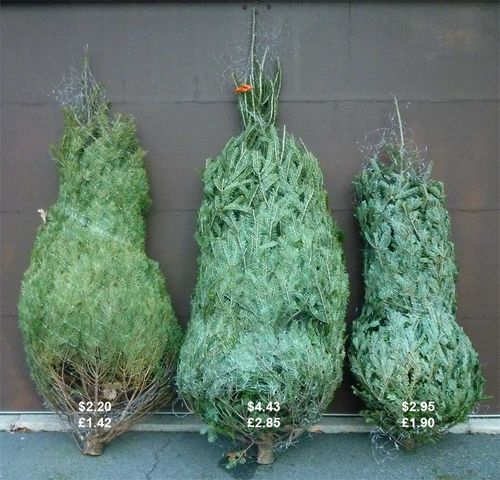 Here in the US some people buy their Christmas trees a month before the holiday, as soon as they’ve recovered from Thanksgiving. Some wait until Christmas Eve. We went out for ours yesterday afternoon – and the timing was perfect.

We passed the local store - “Christmas Trees from $19.95” - and carried on to Lowe's (For Brits: Like a supersized B&Q) because we needed some bungees to tie the tree to the roof of the car. When we got to Lowes we were greeted by a “30% off Christmas Trees” sign. “OK,” we said, “let’s take a look.”

The very friendly and helpful woman who netted the trees for us explained that the manager of the store had yesterday decided to slash the prices of the remaining trees.

Then at the checkout, two more happy surprises: Not only were there free plastic sheets and twine to help us get our trees well secured to the car. -- We still got the 30% discount! So, with sales tax, we got three trees, about 16ft/4.8m of tree in all, for $9.58. For Brits that’s £6.17. Don’t you just love a bargain?

But here’s the thing. Not only is this a great deal, but the staff were so friendly and helpful. And we were told that store manager, Evan Yanik, is full of great ideas that help the store by helping the customer. Makes you want to go back, doesn’t it. And you should have seen the poinsettias…

I just hope we have enough lights for three trees. Otherwise it will be back to Lowe's. Lights are 30% off, you know. 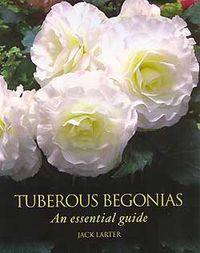 Tuberous Begonias are amongst the most flamboyant of flowers, their impact from a distance is dramatic, yet close inspection reveals a wealth of detail.

Top exhibitor Jack Larter has written a book packed with the practical advice that exhibitors appreciate to help them grow better blooms, with plenty of good pictures of growing techniques and the resulting flowers in all their glory. For new as well as experienced exhibitors this book is invaluable. North American readers may be unfamiliar with some of the products and techniques but they'll find plenty of valuable new ideas.

But in recent years there’s been a massive growth in the use of new types of tuberous begonias for containers, the Million Kisses Series for example, mostly based on Begonia boliviensis. This is a short book, so it would have been good to fit them in. But for growers of flamboyant traditional begonias this is a very useful book.

Tuberous Begonias: An Essential Guide by Jack Larter is published by Crowood Press.

Begonias at the Chelsea Flower Show 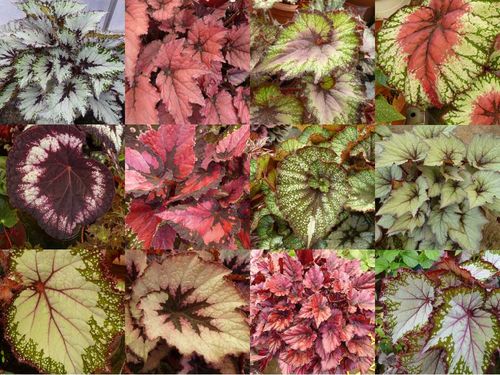 The Chelsea Flower Show, the most prestigious flower show in the world, opens in London on Tuesday. In the run up to the Show I’ve been working on my survey of all the new plants that are promised for a Chelsea unveiling this year – one hundred and twenty two (yes 122) at my last count. These are mainly plants that have never been seen at a British flower show before and/or which have not been available to gardeners until this spring.

But in gathering information I was especially impressed by the wide range of new begonias to be shown by Rhodes and Rockliffe, who hold Britain’s Plant Heritage National Plant Collection® of Begonia (open by appointment only). Many are of their own raising, some are from others. Twelve are shown in the picture (above, click to enlarge) and most are as yet unnamed although top right is ‘Savannah Pink Parfait’, and bottom left is ‘My Best Friend’ from a collection destroyed by Hurricane Katrina.

Look out for Rhodes and Rockliffe at the Show (stand GPD17) and in the online, TV and print coverage.

And check out my posts on new Chelsea plants:
New lily hybrid on show for the first time anywahere in the world
New irises from Australia.

Thank you to Daviid Rhodes of Rhodes and Rockliffe for the individual images.

Yes, yes… I worked in the Palm House at Kew so I should know this plant. Well, perhaps I did water it every day, but that was a long long time ago - perhaps I’ve just forgotten it. But coming across it in the new catalog from Stokes Tropicals that just arrived it really looked amazing. Strelitzia nicolai, it’s called and it’s a huge, 20ft, white-flowered version of the familiar orange Bird of Paradise. Likes the same conditions, too, so shouldn’t be too tricky to grow – if you have a conservatory big enough or if you garden in zone 10… Florida perhaps.

Then I found it on the University of British Columbia’s exceptional Botany Photo of the Day blog – with some startling pictures.

And all I can say is this:
1. Go check it out on Botany Photo of the Day blog here
2. If you’re in the US you can order a plant from Stokes Tropicals here
3. If you’re in the UK, the RHS PlantFinder lists a good number of mail order stockists here

Begonias on trial – the report’s out Over the  next couple of weeks, I’ll be posting news of the results of four trials held at the Royal Horticultural Society’s gardens at Wisley in Surrey. I was involved in judging them all.

These trials have universal value, they’re not just useful in Britain. For as well as assessing the very best varieties, which are awarded the prestigious Award of Garden Merit (AGM), problems of identification are resolved, pest and disease problems analyzed, cultural techniques investigated, and accurate and detailed descriptions published of all the award winners. All this is of value all over the world.

There are over 500 different varieties of Begonia rex grown. [The correct name is actually Begonia Rex Cultorum Group – all are hybrids between Begonia rex and other species.] These would have filled far too much greenhouse space so the Society’s experts selected what they considered the best 87 and these were assessed as foliage pot plants for the home, greenhouse and conservatory. Twenty five achieved award standard. The qualities we assessed most closely were: habit; leaf shape, color, markings and arrangement; length of good display; health; tolerance of a dry atmosphere. For an illustrated list of winners click here.

Continue reading "Begonias on trial – the report’s out" »