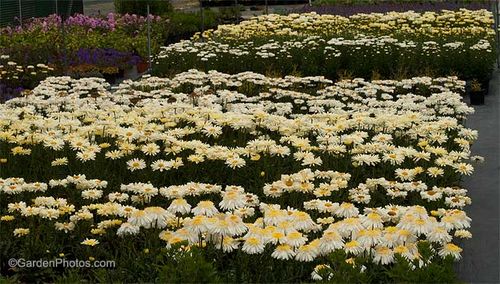 It’s been a bit hectic recently. I've been galloping round Britain visiting plant breeders, nurseries, gardens, family and friends - I did more than twice as many miles as usual - and readying the house for some major building work.

I saw some impressive new Shasta daisies (Leucanthemum) on trial (above, click to enlarge), a field of 10,000 buddleias, a delightful new fragrant verbena, grafted melons, hundreds of different heucheras, some dramatic variegated euphorbias and variegated phlox, cultivated wildflowers like a field of jewels, spectacular angel pelargoniums for patios, and much more. And the first two weeks was accompanied by the superb BBC radio coverage of the Olympics on the car radio.

I’ll be bringing you more on these sights and discoveries, but it wasn’t just the nurseries and gardens that held so much appeal. After a very wet summer the roadsides were unusually colourful for August with scabious in particular in clouds of soft blue. 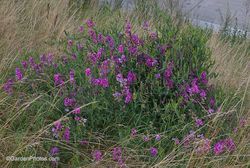 the first I saw after landing in Britain. The perennial pea, Lathyrus latifolius, was sprawled through the roadside grasses on both sides of the Atlantic having spread from gardens far from its natural habitat in Southern Europe and North Africa. I shot the picture on a steep skope in British a gale when I feared rolling down into the traffic (rifght, click to enlarge). But I was also able to cut spikes from the blushed white form growing in our English garden (once I’d untwisted the bindweed) which made a prettty posie with some pink rosebuds.

Hurricane... We still have no power

It rained and it rained... The lake is 2-3ft higher than it was the day before... The little stream that runs through the corner of our property and is usually about 6in deep rose to 4-5ft and is now back close to normal. Two trees came down but not, thank goodnes, on the house.

Our power went out at lunch time on Sunday and the latest update from the extraordinarily uncommunicative electricity company is that it may be some time over this coming weekend before it's reconnected. This is part of the reason why. 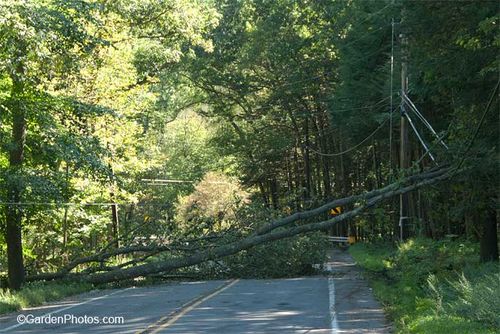 So... after a 60 mile round trip yesterday to get ice for the freezer and fridge... Today we've found a coffee shop with both power and wifi - and bursting with people at their laptops.

If you're expecting a reply to an email... I apologise, I'll get to it as soon as I posibly can! But now we have to go get supplies and the shops are full of people like us whose food is starting to drip out of the bottom of the freezer!

But considering what many many other people are suffering - and with rivers still rising as the flood water fills them and then disastrously overspills their banks - we got off lightly.

Driving round the M25 (London’s orbital road) yesterday, on the way home from the Royal Horticultural Society’s Garden at Wisley, and for the first time I came to a stop for moment in a traffic jam – just at the right place to shoot a very quick pic of this wonderful graffiti. If you’re interested, it’s on the railway bridge between junctions 16 and 17 and can be seen as you travel clockwise.

For some time it simply read “PEAS”, the tag of a local graffiti artist, and was then augmented.

For many years another favourite of mine was painted in huge letters on a wall near London’s Kew Gardens – “CATS LIKE PLAIN CRISPS” (Note for North American readers: crisps  = potato chips). Sadly, it’s long gone.

Next time, back to plants.

Back in the Sixties and Seventies there was standard way of comparing the cost of living around the world – you compared the cost of a Mars bar in different countries. Then we moved on and the Big Mac became the standard. Now it’s coffee at Starbucks.

Having recently been on my horticultural travels through airports in three very different countries – London’s Heathrow airport, New York’s Newark (Liberty International airport) and Cork Airport in Ireland – and having bought a Venti Latte from Starbucks in each I thought I’d compare prices – and convert them all to each currency (using the Yahoo currency converter).

Well, the landscape in Ireland may be beautiful, the people welcoming and music great – but the coffee (and the cost of living generally) is high.

Next time - back to plants!