Gardening videos on the BBC 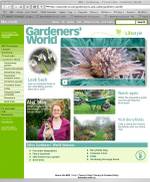 Well, I said I was going to report on the BBC gardening videos from the website devoted to their Gardeners’ World TV show. Hmmm.

Well, on my Mac at least, they're disappointing: not the content, but the presentation. They have individual segments from the show which are streamed separately – not whole shows. But the picture is ridiculously small, the screen size is just 2.5in x 1.5in – what’s the point of that? Then, if you work out how to make the change (Control-Click on the image on the Mac), the alternative is “full screen” – which is so enormous that the definition is so bad it’s not worth watching. So the picture is either clear but too small to see properly or it’s enormous and blurred! Shame... there’s some good stuff there – and it’s technically good in terms of both the horticulture and production.

Come on guys, get a grip.

Anyway, take a look here.  See if it works better for you. Just click on Watch again. If you're as unhappy with the result as I am - at least there's plenty of other good stuff to look at.

I just came across this piece about trilliums on YouTube. I thought you'd like to take a look - the only trillium video on YouTube, I think.

It's actually a segment from a TV show called GardenTime. It won't take me to point out a few problems with this video... It starts with an interesting technical question about flowers changing color after pollination - but what about the basic stuff? How many species are there? Where do they grow? What's their garden value? And thy talk about them as if they spread like hardy geraniums! It's not great horticulture and, frankly, it's not great TV.

But, rightly or wrongly, these shows are made on the thinnest of shoestrings so it's tough for everyone involved. I remember doing some shows in England where two half hour shows were shot in one day! When the budget is miniscule "Get it right first time" has to be the rule and the crew often lives by "Get it right enough". So when, you're watching, just remember how tough it is to make really good shows on a budget that hardly pays for the coffee. Big budget, bad show - then get ready to fling rotten tomatoes at the TV.

But there's one very odd thing about his video - and the show's website: They don't tell us where we can watch the TV show? At the end of the video we're told that GardenTime airs on Saturday mornings on FOX-12, KEVY and KWVT. Well... where?!  Minneapolis, Maine, Missouri...? They just don't say.

Go to the GardenTime TV show's website and - apart from the silly cartoon home page which makes the program look like a kids' show - they don't tell you where and when to watch the show their either! Just that it's returning in March. In fact - well, I got fed up trailing through page after page of the site trying to find out exactly where it airs. I finally found an interview with Tracy DiSabato-Aust in which the host (we're not told who he is, either) mentions in passing that they're in Portland, OR.

It's great that having made the show they've put the segments up, one-by-one, on YouTube. There are over two hundred here. But they really need to do themselves a favor and tell us when we can watch, and where - and who the hosts are!

Finally, on the Press page, I found an ad they'd made for use in magazines. No information about the 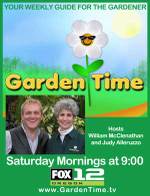 show or its presenters, just pictures. The ad tells me the name of the hosts - William McClenathan and Judy Alleruzzo - and that the show airs at 9an on FOX12 in Oregon (no mention of KEVY and KWVT). Memo to webmaster: Put it on your own front page!

Next time... segments from BBC TV shows from England.